From Friday the 20th till Sunday the 22th of May the Dutch kayak Association NKB organizes the third edition of the Kajakfestival. Just like the previous editions the festival takes place at the site of the Dutch Water Dreams: the artificial white water track in Zoetermeer (NL). During the festival the Dutch (open) Championships Slalom, Freestyle, Downriver racing and BoaterX are held. Alongside to the competitions the festival offers a lot of activities for recreational paddlers of all disciplines. Not only for the white water fraction: Tourers, kayak-polo-players, open canoeists, racers, sea-paddlers and all other kayak- and canoe-enthusiasts are also very welcome!
Last week I had an inspiring meeting with the organization-team of the Kajakfestival. The sea-kayak committee is working on some clinics for the festival. We can't offer salt water in Zoetermeer - but there are some attractive ideas about rolling clinics and rescue workshops. It's still "work in progress", check out http://www.kajakfestival.nl/ regularly - that's the place where (within some weeks) the information about programs, subscription, costs etc. is to be published.

Impression of the first edition: click here.
Video trailer of 2008, the teaser for 2011.
Do you want to help with organizing the sea-kayak-activities: contact me!
Geplaatst door Hans Heupink op 21:03 No comments:

The next ice age 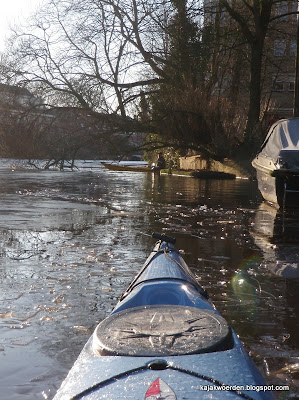 For a while it seemed as if winter was over, but low temperatures are back in Woerden. This morning Jaap and I got stuck in the ice. Paddling opportunities around Woerden are limited again: only the canals in the direction of Oudewater (= Jaap Bijzer Wetering, Lange Linschoten) are still icefree, the passage to the Oude Rijn is already blocked by a solid stretch of ice. One more cold night and it's completely over with paddling around Woerden.

The interglacial period lasted about 2 weeks. I managed to paddle about 70 kms in this time. The "kayak-feeling" just started to return. Fortunately the next ice age is said to be a short one. Anyway: next week I won't be paddling with the friends of kayakclub KV Wyrda - speed skating on the ice rink and mountain-biking in the park isn't too bad either ;-)
Geplaatst door Hans Heupink op 18:21 No comments:

The snow on the ice killed the fish...


Back in the kayak on the ditches and canals around Woerden, after a break of 8 weeks due to the ice, I was surprised by the number of dead fish floating on the surface of the water.

Obviously this year's long (and early) ice-period has had big impact on the underwater-life.
Usually a layer of ice is no problem for the fish. In the cold water under the ice there is often even more oxygen dissolved than in warm conditions, and fish need less oxygen at a low body temperature. But it's a different story with snow on the ice. The layer of snow on the ice blocks the light. Without sunlight algae and underwater-plants can't produce oxygen, which slowly reduces the amount of dissolved oxygen in the water. After a long period of frost and snow-covered ice fish kills occur due to oxygen depletion/hypoxia.

The dead fish are mostly large Carp or Bream - it's a sad sight, but in fact, from an ecological point of view, the selective fish kill (mainly the weak and large ones) isn't too bad: it creates more room for the authentic species.

btw: The fish kill in Woerden is not as dramatic as in the video-clip with the dead fish in Leeuwarden. I assume the waters shown in the video are more shallow than the ditches and canals over here.
Geplaatst door Hans Heupink op 19:24 No comments: 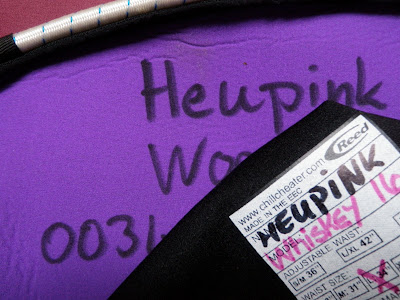 I am a sloppy guy. The last 2 pool-sessions in Alphen reminded me of this annoying characteristic again. I missed a sprayskirt at the end of the each session. After a little quest I could retrieve them - they got mixed up between the sprayskirts of the club. My fault: I should keep my gear better together. No drama, sometimes I just get a bit tired of myself. This weekend (just before the next pool session) I finally labelled the sprayskirts with my name - in order to make at least the puzzle afterwards(which one is mine? They are all black...) less complicated. Of course I should have done this much earlier, so simple and it makes live a lot easier, but when you're sloppy like me: you often neglect these kind of simple things!

Besides sloppiness, there are more profound (Safety) reasons to label your kayak gear. It can avoid search and rescue efforts when there isn't actually a person missing. Contact information can also help rescue teams to narrow the search area in the case of an incident. Sherri Mertz published an interesting article about the recent "Label your gear" campaign of the US Coastguard. Click here for Sherri's article.
Geplaatst door Hans Heupink op 17:21 No comments:

Video by de Stentor-TV: Encouraged by a large audience a group kayakers attempts to cross a flooded road in the city of Deventer.

For some people the high water in the Dutch delta is annoying, but overall the high water isn’t causing big problems this year. Today's main news about the floodwater along the river de IJssel is that it was the number one touristic attraction of the weekend. Thousands came to Deventer to watch the high water. Local paddlers discovered new (temporarily) playspots.
Geplaatst door Hans Heupink op 18:03 No comments: 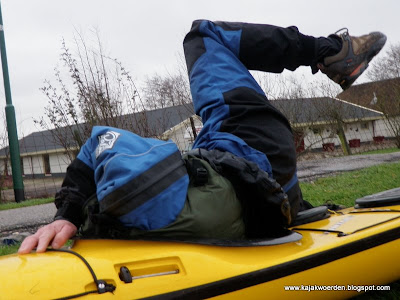 In a kayak with an ocean-cockpit some flexibility is welcome to adjust the footrests...

The 2004 Valley Pintail Seakayak is outfitted with the aluminium Yakima Footrests: solid and durable, but inconvenient to adjust. More recent footrest systems are often more user-friendly.

Today we could finally paddle again on the waterways around Woerden. The "ice-break" lasted 8 weeks this year - a record! We (= Jaap, Alex, Hans) paddled 24 km with a strong Westerly wind on the Grecht (together with Jaap and Alex): a good start to pick up paddling again!
Geplaatst door Hans Heupink op 23:09 3 comments:

The indispensable eye of the lighthouse keeper...


In the last week of 2010 the Dutch Secretary of Infrastructure mr. Atsma presented a X-mas-surprise for the seagoing community: the decision that the lighthouses of Terschelling, Schiermonnikoog stay "manned" in the new year.
This sounds like a drastic change of policy. In recent years the consequent policy of the Dutch Infrastructure Department has always been a hard line of "economization and modernization" (read the posts on Kajakwoerden about Ouddorp 2007, Terschelling 2008). In that policy lighthouses are unmanned. Camera's, radar-devices, computers and a single (on land) Central Marine Traffic Coordination Centre take over the tasks of the lighthouse keeper. The Government had already announced that the last keeper would leave the lighthouse on 1 January, 2011 (= last week).

So in the last minute the Dutch government has changed the plans. Well, not completely: the modernization goes on, the Central Marine Traffic Coordination Centre will take over a lot of the tasks of the lighthouse keepers, but these 3 last lighthouses will at least stay manned during daylight. The argument of the Secretary of Infrastructure is that the human eye is indispensable. Quote from the video: "the human eye (NL: "het menselijk oog") sees it when a swimmer has a problem, when a boat strands on a sand, when a surfer threatens to get into trouble. The human eye has a wider perspective than a camera panning form left to right'. Wise words and you can add that there is no replacement for the local knowledge of our Lighthouse keepers!
The new decision of mr. Atsma was probably also (and perhaps more) motivated by the fact that the Central Marine Traffic Coordination Centre in the Wadden-region simply is not ready yet...
But let's not grumble to much: for the time being, for the recreational traffic including the seakayaker, this is good news!

On the other side of the Northsea, the British experience the same threats. The UK-Government recently presented "proposals for a modernised, fully-networked national Coastguard that can more flexibly manage the greatly varying demands of its workload. These proposals will enable Coastguard Officers to better use their skills and training with a salary that reflects this. We also want to change and improve the leadership, management and support we give our volunteer Coastguard Rescue Officers, and make better use of their local knowledge and training." Nice words, you can't be against such good intentions? But behind these lines hide similar plans to drastically reduce the number of coastguard stations, leaving only a few central stations left for covering huge areas. In several (Scottish) regions campaigns have been launched to try to persuade the UK Government to scrap these plans. Read more about the Scottish situation on the blog of Simon Willis.
Geplaatst door Hans Heupink op 00:04 2 comments:


Today it's exactly 14 years ago since the last edition of the "Tocht der Tochten: de Elfstedentocht" took place. Winners in 1997 were Henk Angenent (in the male category) and Klasina Sienstra(women).
The Elfstedentocht is an epic speed skating competition and leisure skating tour, almost 200 km in length on frozen canals, rivers and lakes between 11 historic Frisian cities. It's held irregularly, in the 100 years of its existence 15 times, because not every Dutch winter permits skating on natural ice. Every year, as soon as a few frosty days pass, the media start speculating about the chances for an Elfstedentocht. With a predicted temperature of 10 degrees Celsius (plus) for the next few days the Elfstedenkoorts (eleven-city tour fever) is now over for a while...

A bit less well known, but no less epic, is the seakayak edition of the Elfstedentocht. This is a non-stop tour with seakayaks along the route of the classic Elfstedentocht. The seakayak event is not presented as a competition, there is only a time limit of 36 hours to finish. But last year some participants tried to push the limits and paddled the 200 km within 24 hours. That sounds like racing...
Big advantage of the seakayak-edition is that it's organized every year. In 2011, for the 9th time, it's held on the first weekend of September.


This was a very promising start of the new year! This afternoon I joined the New Years' party of Vloed Kanosport and enjoyed a refreshing dip in the North sea. Blue sky, sun shining and good surf, the conditions were fantastic. It was my first time in the kayak after a break of several weeks (forced by snow and ice) and it felt so good to be out on the water again!

I paddled the Tahe Greenland kayak in combination with a Greenland stick. Piet and I were the only seakayakers, the other paddlers used short playboats. I found the surf quit challenging for the seakayak, and was careful not to spear a playboater with the sharp bow of my Tahe ;-)
Anyway, I admit that I am more careful with a seakayak in surf since my little surf-accident last year: I don't want to loose another boat! Yet surfing was good fun. And I sure plan to do this more often to get more practice in handling the Greenland stick in surf. Bracing and rolling in surf is no issue with the stick, but I find that in situations were quick reaction, accelerating or turning is demanded, I am not yet as confident with the stick as with the euro-blade-paddle. (No wonder after 20+ years of practice with the Euro-blade and just one year with the stick..)
Geplaatst door Hans Heupink op 18:00 3 comments: