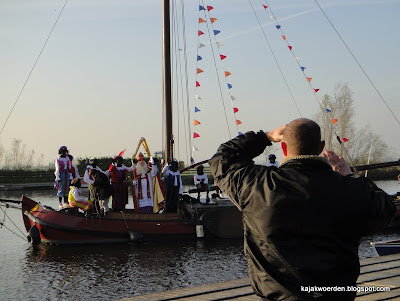 NKB Seakayak Instructor waving goodbye to Sinterklaas
Today the Dutch seakayak coaches gathered at rowing/kayak club Michiel de Ruyter in Uithoorn for the anual NKB instructors meeting. Over the years it has become a tradition to wave Sinterklaas goodbye before the meeting starts. Sinterklaas visited Michiel the Ruiter early in the morning to embark the vessel "Gousekop" for the last stage of his long journey from Spain to the city of Uithoorn.
Geplaatst door Hans Heupink op 19:04 No comments:

This is a tidal race..


In the post about the Sand Motor I wrote that, due to this new peninsula along the Dutch coast, locally the sea currents have increased. The result is more lively water. But you still shouldn't expect too spectacular tide races near the Sand Motor. My colleagues at work asked me what I meant with a tide race. This National Geograohic video (with Paul Kuthe by Brian Smith) makes that very clear. This is a tide race! You don't find races like this in the Netherlands. Alas ;-)
Geplaatst door Hans Heupink op 18:30 No comments:


The Sand Motor is a large amount of sand (about 21 million m3) which is recently deposited in front of the Dutch coastline, roughly situated between Rotterdam and the Hague, in the shape of a peninsula of about 100 hectares. Wind, waves and sea currents will spread the sand around, creating new land for nature and recreation. This is called "building with nature". Working for the province of Zuid-Holland I've been talking a lot about this innovative project for coastal development. Now the construction of the project is (almost) finished it was due time to explore the new coastline by kayak. René and Roel joined me for the "expedition".

The conditions were perfect: today was the warmest November the 4th ever measured in the Netherlands: 16-18 gr. Celsius, sunny with a blue sky. The wind was blowing rather hard, 5-6 Bft in the morning, 4-5 Bft in the afternoon, but from south-southeastern directions, which is a little of-land. We planned to stay close to the coastline and with this wind direction, you are sheltered by the dunes and there is not much surf to be expected. 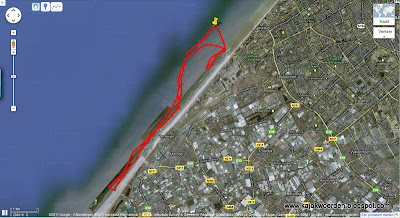 The tracklog gives a somewhat surrealistic picture: we paddled around a peninsula which is is so new it isn't visible yet on Google Earth. The track gives a nice indication of the current shape of the Sand Motor. The yellow marker indicates the position of the northern cardinal buoy.

The Sand Motor gives a new experience to paddling along the coastline. An interruption of the straight line. Normally there would be hardly any surf here with a southern wind - but thanks to the new sand banks (partly underwater) we enjoyed some good surfable waves along the southern side of the Sand Motor. The sea currents also changed. The current increases most at the exposed northern tip of the Sand Motor. Still don't expect spectacular tide races over here (therefore the currents along this stretch of Dutch coastline are to moderate), but in combination with the wind (especially when it comes from the West or the North) and the shallow sea, the current can create interesting conditions - see the aerial photo below - taken during a recent storm. With any NW-wind above 4 bft. be careful over here - it's an exposed site! 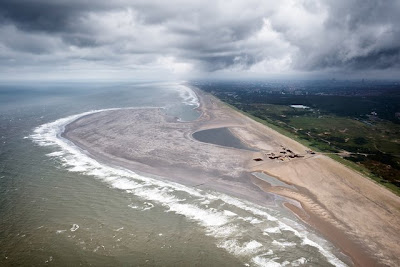 About the idea behind the sandmotor:


Note: the construction works for the Sand Motor are (almost) finished. The site itself (situation early November 2011) however is still closed. Access to the Sand Motor peninsula from land and from sea is until further notice strongly prohibited. Security guards monitor the site all day and send every "intruder" back. Swimming is forbidden, but kayaking (and kite surfing) is not swimming - is allowed. So at this moment: you can paddle along the Sand Motor but you are not allowed to land on the Sand Motor.
Geplaatst door Hans Heupink op 17:36 No comments: