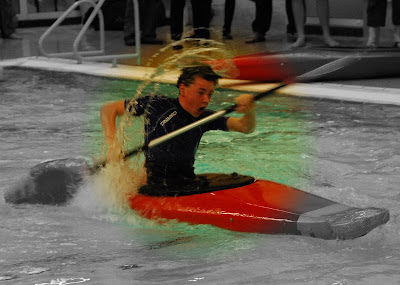 It's a good tradition of Kayak club de Kromme Aar to make open house of the last pool session of the season. Everybody is invited to have a look at the kayak activities and to go for a swim in one of the pools. Part of the festivities is an open rolling contest. And despite the fact that I am not a very competition-driven person I can't resist to compete and feel obliged to protect the reputation of the Kayakclub Wyrda from Woerden! a heavy burden is resting on my shoulders!

The competition is about who manages to do most rolls in 60 seconds: no hand rolls, but rolls with a paddle. The record was set in 2005: 21 rolls. A lot of rollers have come close to this record, but until this year no-one equalled it since. Crucial in this competition is not to collide with the sides of the swimming-pool - in speed rolling it's hard to stay in place and the pool isn't very big. Repositioning makes the difference between winning and loosing.

With 18 rolls I was second in the category of the veterans: aged 41+. I was a bit disappointed, I should have done better: now I was beaten by my friend Patrick from kayakclub Natsec - who managed 19 rolls. To my relief Patrick was competing in another category: the senior-class in which he became third ;-) We were both beaten by the juniors Tijmen, Nico ( Kayakclub de Ronde Venen) and Tom and Fred (Kayakclub de Kromme Aar) who did all a very impressive 21 rolls!
Congratulations! (But beware: next year I come back and then I will be prepared!!)
Geplaatst door Hans Heupink op 21:54 No comments:

A dramatic accident on the Rhine 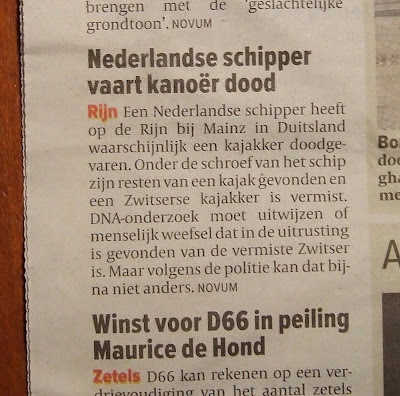 Dagblad Dag 25-03-2008 / www.dag.nl
There is a world of tragedy behind this small report in the sideline of today's newspaper:

Dutch skipper kills kayaker
Rhine - A Dutch skipper has probably killed a kayaker on the Rhine near Mainz in Germany. The remains of a kayak were found under the propeller of his ship and a Swiss kayaker is missing. DNA research must prove if the human tissue that is found in the equipment belongs to the missing Swiss. According to the police there is little chance that it isn't.

Update 26. March:
Rudi pointed out that in the German Faltbootforum a discussion is going on this accident. Thanks Rudi! In the forum is a link to the Police-report . Don't underestimate the risks of shipping traffic on the Rhine!
Geplaatst door Hans Heupink op 22:46 No comments: 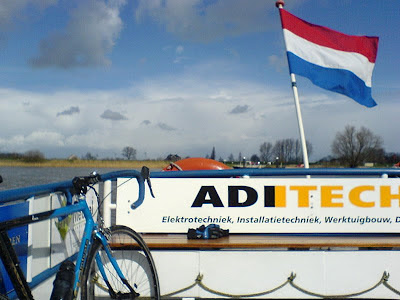 Desperately looking for any occasion to work on personal fitness ;-), I said yesterday to Janine and the kids that I would follow by bike - as they would visit (by car) friends of us in Tilburg (= 80 km's from Woerden). It's a nice route to bike through traditional Dutch scenery, crossing 3 rivers: the Lek, Merwede and Maas. I planned to cross the Lek by the bridge near Vianen, but as I passed "recreatieterrein Salmsteke"(btw: Salmsteke is an excellent starting point for kayaking on the Lek), I noticed the ferryboat to Ameide. This little ferry is only for pedestrians and bikers, with a limited service, and now because of Easter in duty. I never used this ferry before and enjoyed the river from a new perspective. A bargain: for 70 eurocents I had a private ferry - and probably I was the only user of the day.

When I left Woerden sun was shining, blue skies - after a start of the day with snow and showers of hail. I hoped for a good weather-window for 2,5 hours, checked "buienradar.nl" (live satellite images of showers) and took the chance. It started promising and sun was still shining on the ferry on the Lek, but at the horizon dramatic skies arose. Few moments later the world looked totally different - like a dark winter-day... 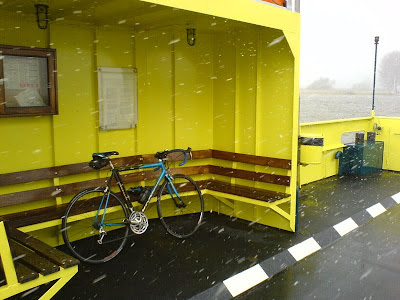 It soon got colder, windier and wetter. On the ferry on the Maas (Capelse Veer) it was snowing. Slowly the feeling disappeared out of the extremities: first fingers and toes, then hands and feet, arms and legs. I kept a steady speed, but noticed I became less aware of the surroundings - this was no "flow" anymore but symptoms of hypothermia. After 2 hours biking through snow and hailstorms with temperatures around zero, dressed in Lycra tights, a Gore jacket and neoprene overshoes I had turned into some kind of icecube -> ready for a defrosting program in Tilburg.

Conclusion: I enjoyed the ride, but admit this wasn't a very sensible action! Instead a lesson on windchill, the effects of humidity, the importance of an adequate outfit (and of overestimation of oneself? ;-)!
Geplaatst door Hans Heupink op 23:27 No comments: 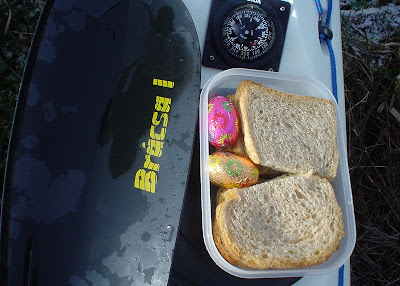 This is my interpretation of a great "Paasontbijt" (Easter breakfast de luxe) on location. I was a bit frustrated being so busy lately with work that kayaking (and kayak blogging ;-) got a bit neglected. I desperately needed to go out. So - in good agreement with the family - I got up early for an extensive paddle instead of the traditional luxury breakfast and egg-search-quest of the first Easter-day. Guus is always in for actions like this. Easter comes very early this year (next time this early is said to be in sixty years - this must be the earliest of a lifetime..) - but snow? It's springtime! 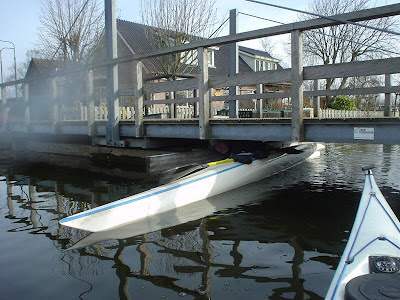 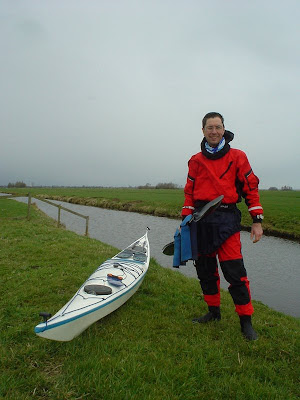 The Kokatat Goretex Expedition Drysuit and a seakayak might be a bit overkill for the placid canals and lakes of the Groene Hart - but they are very comfortable and nice warm in these freezing/chilly conditions ;-)
The wing paddle was today's experiment. I normally use this wing in combination with the K1 racer for short training sessions up to 10 km. I wanted to try out how it performs (or better say: if I can handle it) on a longer distance in a seakayak. The Brasca I is a large size wing - I won't recommend it for long distance touring, unless you are a very powerful and athletic paddler. I am not... 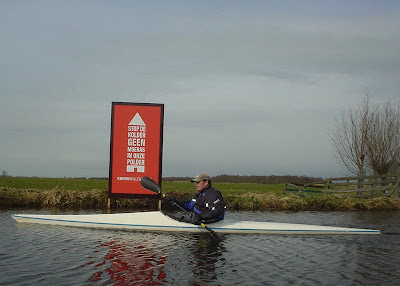 What I am so busy with at work? Coordinating an expert-group on water and soil strategies for the future of the "Groene hart". Local groups are very concerned! Farmers worry about strategies against settlement of the soil and fear that agricultural ground is transformed in wet-nature("moeras"= moor). 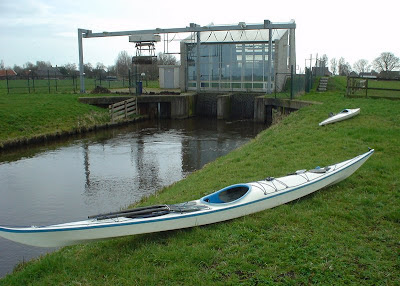 One of the portages along the route. The watersystem of the Groene Hart is very complex and regulated by numerous pumping stations. Living below sea level means pumping day and night, all year long... And due to this pumping (peat) soil is sinking up to 2 cm's a year. Put this in a perspective of climate change - it's quit a challenge to keep this complicated watersystem sustainable and affordable!
Geplaatst door Hans Heupink op 17:01 2 comments: 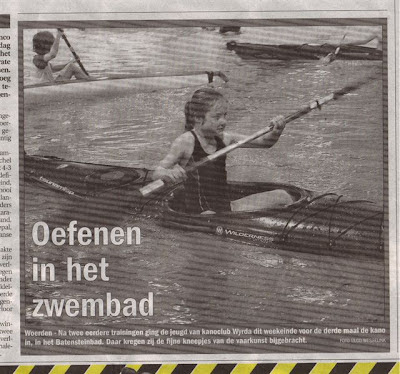 Woerdense Courant, 20 maart 2008
Kayakclub Wyrda started this year with activities for youngsters. In seakayak-practice I spent most of the coaching time working with adults. Pool sessions with kids are new for me - a great pleasure to do. Kids ask for a different approach for a stimulating, inspirational and fun event - I learned kids are no "mini-adults" and should be treated in a respectful way that matches their psychological and physical level. On the other hand: realize that adults are "maxi-kids"- much of the the playful, fun and a bit competition-orientated elements of the kids- approach works very good with adults too...
Geplaatst door Hans Heupink op 19:29 No comments: 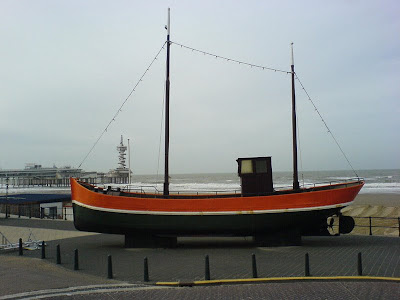 As far as I know: no stranded vessels on the Dutch beaches this time. The fishing boat on the boulevard of Scheveningen is put there years ago as a decoration referring to the rich fisherman's tradition of this part of The Hague.
Today I had a work related "heissessie" in the Carlton Beach hotel in Scheveningen. "Hei(de)" means "uncultivated land with sandy soil and scrubby vegetation", but a "hei-session" has nothing to do with rural sites and uncultivated land (alas!) - it's just the idea to work on a remote place with a couple of colleagues - in order not to be disturbed by daily questions - and in this way to work in a short session intense and effective.
When I arrived at the Beach Hotel early this morning it was high tide. Storm had gone, only a breeze was left. Due to yeserday's wind surf was fantastic: a clear zone with breakers up to 1-2 meters high rolling out on the beach - a kayaker's dream. This is the surf I wished we had in Wangerooge last weekend. But today no kayak but work instead: in a conference room with a view on the sea. Life can be so cruel.
(Life ain't to bad either - I enjoyed a extensive walk along the beach during lunchtime (but at that time (near Low tide) surf had no power any more).
Geplaatst door Hans Heupink op 21:33 1 comment: 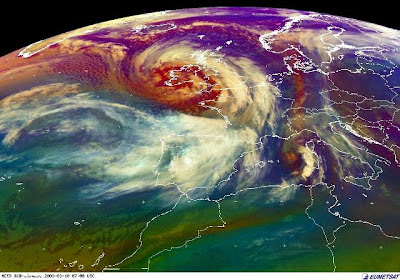 Storm in Europe from Meteosat MSG (Source: Eumetsat)
For Wednesday-morning and this afternoon a severe weather warning is given out: Dutch coastal zone, West 9 Bft., gales, showers. Today's storm is expected to be more powerful than it was Monday. Ad reported he had a great ride in his kayak on the river the Lek this morning. It's a brave guy!
Geplaatst door Hans Heupink op 16:01 1 comment:

These pictures are from the "Spring Cleaning 2008" organised by the Salzwasserunion (SAU). The Spring Cleaning is an early season training weekend for Sea Kayak Coaches and Instructors of the SAU(and those going to be). I participated in in this weekend together with Nico Middelkoop. It was a great weekend -> thanks to Bernhard for the invitation and for the organisation! A lot of stories to tell, they will follow later, first come some busy days at work!

(double click on the pictures to pop up the originals)
Geplaatst door Hans Heupink op 23:56 No comments: 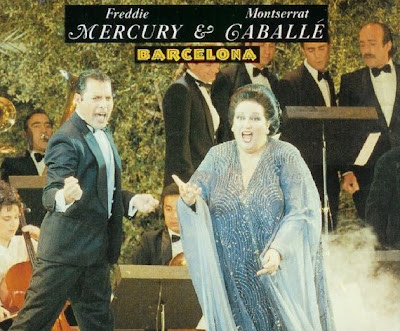 On their first meeting at the Ritz Hotel in Barcelona Montserrat Caballé asked Freddy Mercury to write a song about her home town. The result realised Freddie's dream of recording with the famous Spanish opera star who he considered to have the most beautiful female voice in the world. A hit single in 1987, it reached no. 8 in the UK, but had a second lease of life five years later when it reached no. 2, after being adopted for the 1992 Olympic Games. Montserrat Caballé performed the song again in the Barcelona Olympic Stadium immediately before Manchester United's 1999 triumph in the UEFA Champions League - a true European anthem - Queen Greatest Hits, EMI Records Ltd, 2000.

A non-kayaking intermezzo: a mental support front for Janine. My partner Janine is a passionated long-distance-runner (and fan of the music of Queen). Tomorrow she is one of the 9122 athletes running the epic distance of 42,195 km through the streets of Barcelona. Good luck Janine!
Geplaatst door Hans Heupink op 16:48 2 comments: