The Wadden Sea in Winter


Slideshow of today's visit to a favourite Dutch paddling destination: the Wadden Sea. On one of the last days of 2009 with friends and family from a different perspective: not sitting in a seakayak but travelling with a Wieringer fishing vessel.
Geplaatst door Hans Heupink op 18:16 No comments: 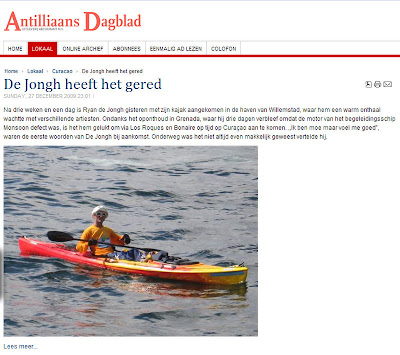 There is a Dutch isle with sunshine and 32 degrees Celsius in December.
Today Ryan de Jongh finished a kayak trip of 1600 km in the Dutch Caribbean. He looks quit relaxed on this picture..
Geplaatst door Hans Heupink op 21:18 3 comments: 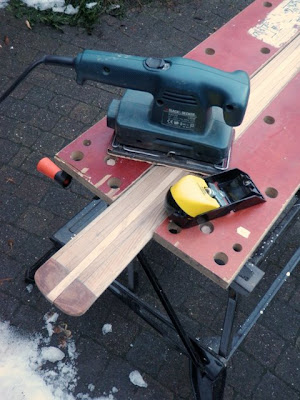 It's more than 2 years ago that I carved my own Greenland-style paddle (GP) during the workshop of Tom and Dick from qajaq.nl. A day woodworking was too short to finish the paddle completely: the GP still needed a final touch: the blades being a bit too rough and especially the tips too thick. Today I finally started to finish this job...

Despite not being ready, in the meantime the GP is used quit intense, so it can use an overhaul-session anyway. For Greenland-style rolling my GP did a good job. But to be honest; almost any piece of timber would have done. Using it for paddling was not the success I hoped for. Initially I found paddling with the GP quit tiring, and later when my muscles had got used to the different style of paddling, I still had a hard job keeping up pace with other paddlers (using Euro-blade-paddles). Very annoying was the plopping noise the paddle makes every time it enters the water. I always blamed my technique. However, how much I tried and experimented with tips and instructions from experienced GP-paddlers to improve my technique (working on 'the canted Greenland-style stroke"), the plopping noise stayed.
The revelation came earlier this year when I swapped GP's with Marc and Bernhard during a paddle after the Llanca-seakayak symposium: I was flabbergasted by the grip of the GP-paddles of Marc and Bernhard! Paddling with their GP's was a delight: effortless, fast and very quiet. Comparing their GP's with mine: their GP's are more slender. Which was no surprise of course, my paddle was unfinished. So action is overdue - it takes some time before this guy acts ;-)
Geplaatst door Hans Heupink op 20:05 1 comment: 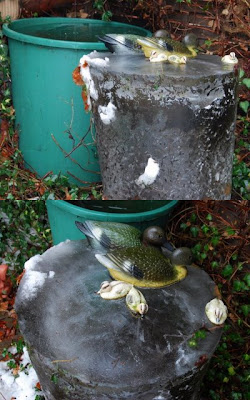 The fate of this paddler of Woerden during the Christmas-days is just like the duckies he spotted: stuck in ice, open water not far away, but no way to get there.

Well, for some duckies Christmas ends even worse ;-) 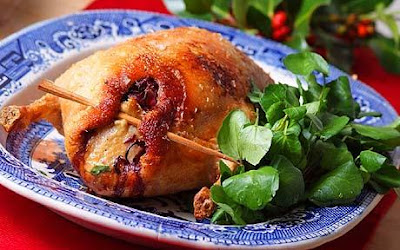 Video courtesy Hotwiredbrain
Freek from Zeekayakforum.nl organises, in cooperation with Peter Renkema, classes in Greenland-style rolling. The classes take place in the (warm!) swimmingpool of the Stoetenslagh resort in Rheezerveen. The first session is scheduled Saturday, January 9th, 2010. Details about location, costs etcetera: Zeekayakforum.nl
There are only a few places left - when you're interested contact Freek soon.
Highly recommended!

The classes are given in Tahe Marine Greenland kayaks. Kayak Centrum Arend Bloem kindly provides the classes with the new T (touring) version of the Tahe Greenland for larger paddlers.

Icebreakers - winter paddling in the Biesbosch 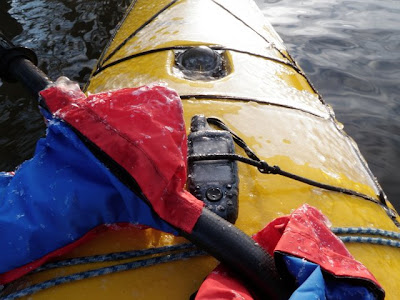 Winter paddling in the Biesbosch National Park. Temperature at 11.00 AM: minus 10 degrees Celsius... The first issue was how to get on the water - the takeoff points mostly used to paddle in the Biesbosch were blocked by ice. Finally we found a good spot to start next to the river in Geertruidenberg. The next challenge was to find a way through open water in the Biesbosch. We expected the small creeks to be impassable, but (despite the tidal hub in the Biesbosch) also some wide stretches of water were already covered by a layer of ice. Anyway, we managed to make a nice trip around the Biesbosch - after exploring some creeks leading to the centre of the nature reservate, we paddled the "outer ring". A total distance of 30 km through one the few remaining fresh water tidal-areas in Europe. We enjoyed the abolute quietness, no other humans around, just two paddlers enjoying in silence the amazing landscape and wildlife. Enormous numbers of birds are resting and foraging in this wetland - caution (keep distance!) is needed to prevent disturbance.

Some notes about "paddling minus ten":
- clothing: a drysuit with a good fleece isolation layer under it is great - not to say a must!
- warm hands: a combination of simple nylon paddle mitts/poggies (without lining!) and a pair of neoprene gloves keeps the hands warm;
- frozen wet neoprene gets stiff - normally the neoprene sprayskirt is my favourite, but for winter paddling a sturdy PVC-sprayskirt is better - once frozen refitting a neoprene sprayskirt gets very awkward;
- deck mounted towing lines, split paddles (and any other spare gear) on the deck: forget it - it's useless when covered with a centimetre of ice...
Geplaatst door Hans Heupink op 21:09 3 comments: 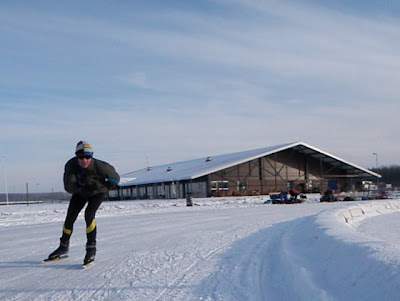 Skating on the track of Flevonice with Jan and Alex this morning.
Running a marathon in 2.15 hrs is very impressive. Skating this distance on ice in the same time is nothing special... Anyway, I am quite pleased with this achievement this morning, untrained and for the first time on ice since almost a year, skating an average speed of 19 kmh... 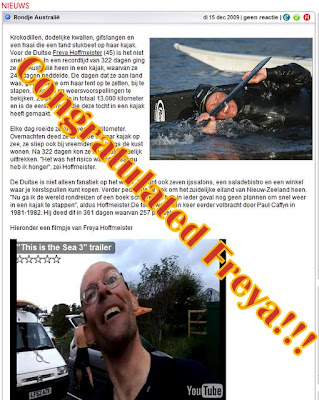 Yesterday Freya Hoffmeister finished the solo-circumnavigation of Australia by seakayak: an impressive, almost unbelievable achievement. Anyone who knows Freya, will agree that if there is one person in this world able to accomplish an expedition like this: it must be Freya. And Freya showed us she really is. Compliments to Freya!

While normally Dutch press hardly pays attention to kayaksport, the succesfull completion of Freya's expedition was covered by the Dutch National Press Agency ANP, and by a quality newspaper like NRC-Handelsblad.

The journalist of ANP has problems in making the difference between paddling and rowing (a common mistake) and added a video-clip of Justine Curgenven to the news-item. The video starts with the familiar face of another Dutch seakayaker...
Geplaatst door Hans Heupink op 23:07 No comments: 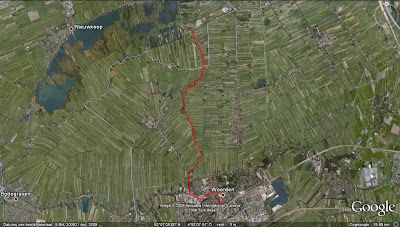 Click on the picture for a detailed view
The "Grecht" is a canal near Woerden. How the Grecht follows the lines of the landscape looks quit "natural", but in fact, like most waterways in the Netherlands it's artificial: man-made, excavated by hand in the 14th century. Due to the ever going on "downwards shift" of the surrounding peat-soil terrain, the water-level of the Grecht is one or two meters higher than the land alongside, which makes paddling attractive because of the wide view. 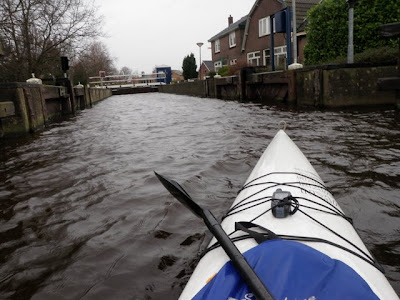 The lock of Woerdense Verlaat today - different conditions earlier this year...
Around noon I paddled with Guus on the Grecht, just to break out off the dark, rainy, clouded and short December-days. With the Southerly wind starting around 4 Bft, but soon increasing up to force 5/6, it was a swift paddle from Woerden to the sluice in Woerdense Verlaat. Paddling back was a more a struggle, fully exposed to the wind. Over all we paddled an an average speed of 7,9 kmh on this 21,6 km paddle.
Geplaatst door Hans Heupink op 18:38 1 comment: 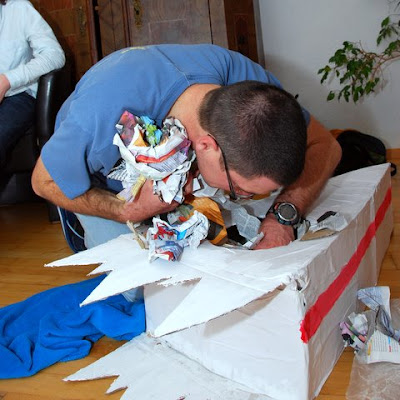 Yesterday the birthday of Sinterklaas was celebrated in the Netherlands. Family members present each-other little gifts on the evening of December, 5th. These gifts are to be creatively disguised (for which the Dutch use the French word "surprise"), and are usually accompanied by a humorous poem which often teases the recipient for well-known bad habits or other character deficiencies. In my case it wasn't too difficult to find inspiration for an appropriate "surprise": Lieke built a very realistic copy of my broken kayak.
Geplaatst door Hans Heupink op 17:44 1 comment: