Jörgen has made it to Moldova!

At Wednesday the 27th August Jörgen Cobber van der Pol arrived in Chisinau, Moldavia. Jörgen started his "smiles for Moldava" kayaktrek on April the 5th. in Groningen. He paddled solo over 4000 km's across Europe since and has gone through a lot of adventures.
Jörgen: congratulated with this fabulous achievement!
Jörgen has written a diary of his adventures in Volkskrantreizen (in Dutch).
"Smiles for Moldava" is a fund raising action for maxillofacial prosthetics in Moldavia.
Geplaatst door Hans Heupink op 00:21 No comments: 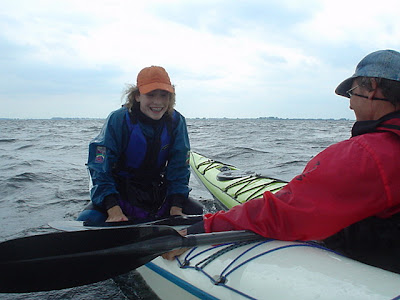 Once a year kayakclub Wyrda offers the so called “Grootwaterkennismakingstocht“. This activity is aimed at kayakers new to seakayaking. It's a kind of a mini-course, split in two days: on the first day basic paddling and safety skills are practiced on open water – in preparation of the second day (a week later) on which a trip on the North Sea is programmed.

The “Grootwaterkennismakingstocht” is a rewarding activity to organize with enthusiast people enjoying the first time out at sea. Today I was leading the first day of the course, assisted by Patrick from kayakclub Natsec, on the Grevelingen. The Grevelingen is the largest salt-water lake of western Europe. It’s separated from the North Sea by the Brouwersdam – it’s a non tidal water with the salty taste of the sea – a perfect spot to introduce people to paddling on a large stretch of open water.

The challenge in organizing an activity like this is to keep it “low-level”. It’s often said that “a beginner in seakayaking isn’t a beginner in kayaking” (this quote used to be on the NKB-website, I understand why, but also think there are some arguments against it..) – but this activity should also be manageable for beginners in kayaking. A calm sea state is a condition. The weather forecast for the day (wind SW 4-5, increasing to 5-6 Bft.) wasn’t to promising in this respect. Some participants were a bit a worried about this foresight, yet I assured they would have an nice day… The covered distance wasn’t important, nor was speed or timing: just paddling in a comfortable pace, doing exercises every once in a while, relieved by rest stops on the water and an extensive lunch break made it a good day for all. But I can’t help: paddling against the wind is fatiguing! Which is good experience to get familiar with seakayaking of course ;-)

For Jelle it was the first time paddling on salt water. I had a great time watching my 14 year old son enjoying the waves: Jelle had never done this before, but he loved pounding against the wind and he tried to catch every surf with a following wind. Maybe a bit frustrating for the other (20-40 years older) participants to watch how easily a teenager learns. I was impressed by his suppleness – and by his power: it won’t take long before he paddles me out. I can hardly catch up now… 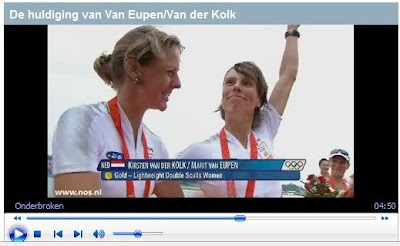 Video at: NOS-Olympische Spelen 2008
Some deceptions with swimming, but the Dutch athletes were very successful in the water sports disciplines this weekend: Gold and Silver in rowing (double sculls Women, eights women), Silver in sailing (Yingling women). And the Dutch slalom kayakers also performed outstanding: Ariane Herde and Robert Bouten both made it to the finals!

Update 18-08-08:
The Olympic games are a good excuse for some (harmless) chauvinism and nationalism ;-) This morning the Dutch success- story continued with another Silver medal in sailing (470 women) and Gold in cycling (Marianne Vos won the cycling points race). Dutch women are very strong!
Geplaatst door Hans Heupink op 23:25 No comments: 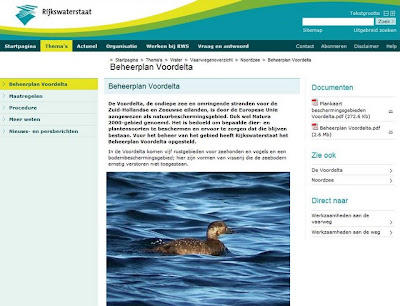 Over the past two years I have regularly written about the upcoming new rules for human activities in the Voordelta and the consequences of these rules for seakayaking in this popular stretch of the North-sea coast (near the isles of the Dutch provinces Zuid-Holland and Zeeland).
Some previous post on this topic:
Some weeks ago the authorities have published the final decree: het Beheerplan Voordelta. On the dedicated website of Rijkswaterstaat you can find all the official documents. The last decree is still open for appellate review and on some preliminary decisions the procedures in court aren't finished yet - nevertheless: legally the new rules are already in force. In the next months information signs will be placed on location and the closed zones will be marked by buoys.

The kayak relevant parts of the final decree are unchanged in relation to the drafts I referred to before. The new rules result from a good and intense contact between the authorities and the Dutch kayak-associations. It's a fact that freedom of movement for seakayakers in the Voordelta is reduced. But I do emphasize that the interests of the kayakers have really been taken in account and that the new rules still offer attractive opportunities for seakayaking-activities in the magnificent nature reserve of the Voordelta.
Geplaatst door Hans Heupink op 17:46 No comments:

Polar times in The Hague 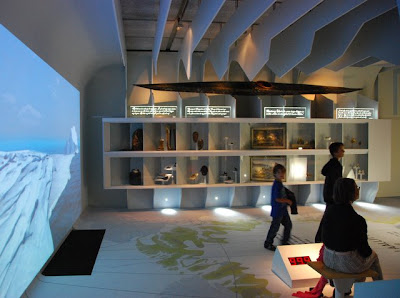 It's a good Dutch museum-season for people interested in polar (wild)life and Inuit culture. In Leiden the exposition "The big thaw" is still running (when you haven't visited "The big thaw" yet: hurry - it's in the last month). And in July the Museon in the Hague opened a new furnished Polar exposition room as part of its permanent exposition.

The Museon is the former "Municipal museum for education" in the Hague. Since the mid eighties it has become a popular scientific museum with a huge collection, covering subjects from geology, biology & environmental science, history & archaeology, physics & technology to cultural anthropology. The Museon has a lot of Inuit objects from Greenland, acquired by Nico Tinbergen around 1930. The new Polar room isn't very big, but attractive: a modern tasteful designed interactive multimedia presentation. For kayak enthusiasts: exposed are two kayaks from Greenland.

A small kid-sized one (with a mini Greenland-paddle and a cute little harpoon), and a very old greenland one decorated with Dutch West-Frisian (Hindelopen) paintwork. The latter is a bizarre object - some hybrid of Greenlandic and Dutch culture: in the 17th century Dutch whale hunters brought the kayak to the Netherlands and an anonymous painter decorated it in the 18th century with Dutch folk art. Presented are also some kayak-models, clothing and other hunting gear and there are also 2 videos about kayaking and hunting with a kayak. 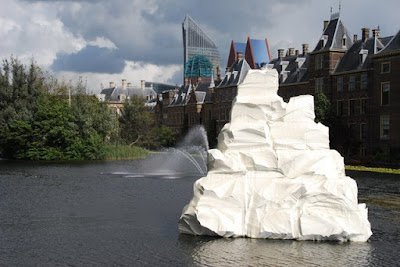 Walking back to the station we discovered a giant iceberg floating in the Hofvijver, next tot the Netherlands Houses of Parliament. We first thought it would be part of some climate campaign of a NGO. But the object turned to be part of the exhibition The Hague Sculpture. 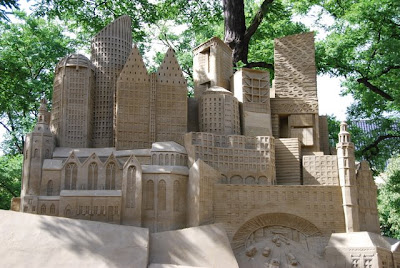 Nearby at the Buitenhof is a giant sandsculpture to be found. It's made two months ago. Sun and rain have eroded the sculpture since, but it's still amazing intact. Against the background of the skyline of The Hague in some scenes the theme ‘Den Haag, City of Peace and Justice’ is presented. The Skyline is a compilation of the known historical buildings in The Hague, complemented by the modern architecture of the (partly yet to build) new centre. Prominent in the foreground is the Peace Palace, as an international symbol of the City of Peace and Justice. End of august the remains - a mountain of sand - will be removed from the Buitenhof.
Geplaatst door Hans Heupink op 21:41 No comments: 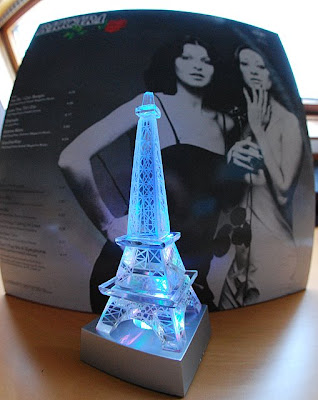 Baccara was a female vocal duo, formed in the mid 70's by two Spanish flamenco artists. The duo peaked at the music charts with their debut single "Yes Sir, I can boogie", soon succeeded by another cult-classic: "Sorry, I am a lady". The combination of English with a strong Spanish accent, a blend of pop, disco and Spanish folk, performed by two charming ladies was a big hit all over Europe. In 1978 Baccara represented Luxembourg at the Eurovision Song Contest with "Parlez-vous français?". Broken French with a Spanish accent was too much for the Dutch - no points for Luxembourg and after the songfestival Baccara was soon forgotten in the Netherlands. In Germany and some other neighbour-countries the story went on, and after a split up incarnations of Baccara appeared into the 90's.

The latin charms of Mayté and Maria appealed to me as young teenager - the album from Baccara was one of the first "LP's" I bought from my own money. The album still is in my - neatly alphabetical organised - vinyl collection: Baccara between the "Satchmo Serenades" from Louis Armstrong and "The Last Waltz" from the Band. Over 300 vinyl records only collecting dust, but I can't say them farewell...

Sorry, I digress. Why this little confession in this personal but mainly seakayaking-related weblog? The explanation comes in two steps. The first step is that I just returned from Paris. I have been biking with partner and kids from Woerden to Paris (click here for the picture album). I enjoyed the holiday in France, but "Parlez-vous francais?" -> communication in French is quit difficult for me, alas. I manage, that's all, and I really do regret I didn't put more effort in learning French in my schooldays...
The second step is that I am busy with the preparations for the Vlieland Seakayak-week of the NKB in September. The NKB-courses are getting more and more international: this year we also welcome Spanish participants. As I heard of the Spanish interest in participating in our seakayak-courses I was immediately very enthusiast about the idea, but a bit worried about the communication. Our seakayak-coaches don't speak Spanish and the Spanish participants don't speak Dutch (nor German, nor English). The solution turned out to speak French: the Spanish participants are said to speak French fluently - and so does one of our Seakayak-coaches.
Back to Baccara: when the Spanish kayakers speak French like Mayté and Maria - even I must be able to understand ;-) !