Paddling on the Oosterschelde - circumnavigating Galgenplaat


Slideshow of the trip 9 days ago, on a very hot saturday. Thanks to Stef and Monique for the hospitality!
Geplaatst door Hans Heupink op 23:47 3 comments: 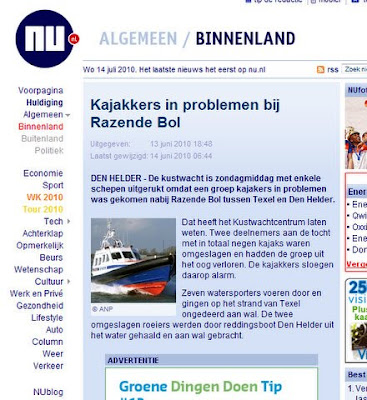 5 weeks ago an incident with a group of seakayakers was "breaking news" in Dutch media (radio, TV, web and newspapers). I can't remember this happened ever before in the past 15 years (= the period I am involved in Dutch seakayaking). For some extent the buzz will have been because there was no other news in summertime (we call this: "komkommertijd" the Dutch expression for the "silly season"). But it was a really serious incident: a group of 9 paddlers got into trouble in big and steep breaking waves of 2-3 meter above the sandbank "de Razende Bol". The group got split up, 3 paddlers lost contact with the group, 2 of them capsized, 1 lost his kayak, the coastguard and 2 lifeboats from the KNRM were involved in the search- and rescue operation. Fortunately,no one got really (physically) harmed: the lifeboat rescued the capsized paddlers and the 3 lost paddler finally had radio contact and managed to get back to the group. One of the swimmers was brought into hospital with signs of hypothermia - but in the evening all were safe and healthy home. A broken seakayak and 9 broken ego's were the final harm.

The incident has raised many questions in the Dutch seakayaking community: Who was involved? Were the paddlers experienced seakayakers or not? What happened? What went wrong? What were the conditions? Could this incident have been avoided? What can we learn from this? Answers to these (and many more) questions can be found in the extensive and thoroughly report the group has published last week. You can find this report (in Dutch) and read it yourself via the website of Peddelpraat, or by clicking HERE. (The report reads like a new chapter in Seakayaker in Deep Trouble - the book of true stories and there lessons from Sea Kayaker magazine by Matt Broze and George Gronseth).

For the non-Dutch readers: I am sure there is an English summery on it's way. The group consisted of 9 experienced kayak-guides and coaches. The conclusion of the group is that the incident occurred just because it was an informal meeting of tour-leaders, paddling "as friends together", forgetting and neglecting some real essentials of leadership and safety. The group realizes they made basic mistakes. On the other hand: their experience and trained nature contributed to the "good" ending and prevented to some extent things getting worse - All realized it could easily have ended much more dramatical.

I have great appreciation and admiration for the open and honest way in which the group has reported about the incident! It makes all of us aware of our vulnerability. Don't say this can't happen to you...

The end of the radio silence?! 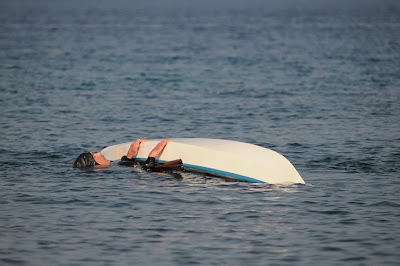 Never before it has been quiet on kajakwoerden.blogspot.com for such a long time. Just like earlier periods of silence it's (partly) because I was busy with other things. Actually these were "nice things" mostly: I enjoyed working for the Dutch provinces (which is quit busy lately, but also fun in a period of an uncertain constellation in national politics), supplemented with a lot of diversion in the private context: biking (Alpe d Huez with racers), biking (with bikers), biking (with family) and more outdoor-activities for the balance between body and mind ;-). A more basic reason for the silence is, that with the weather being very hot during the last weeks, it wasn't too inviting to spent leisure time behind the PC.

But there was also a different issue that kept me from blogging this time: let's call it a serious kind of blog-fatigue. This became very obvious to me after the Dutch seakayak-incident (I'll write more about it in a following post) some weeks ago. On June, the 13th. a group of Dutch seakayakers got into serious problems. In a big rescue operation 2 lifeboats were involved, one paddler was taken to hospital. Fortunately nobody got injured, but the incident received a lot of attention in Dutch press. The temptation to write in my blog about this incident was great for me. But I hesitated to do so. The reason was that, though I wasn't personally involved in this incident, I felt very connected: personally - because I know most paddlers of the group and call them good friends, functionally - because most of the paddlers are NKB-coaches (and I happen to be in charge for the NKB-seakayaking committee...). The activity on the 13th. wasn't part of the NKB-seakayaking-program but was a non-formal meeting of tour-leaders and coaches who are active for Peddelpraat. The people involved wanted and deserved time for reflection and to get the chance to publish their own story. I respect this and decided not to make things more complex by commenting from the sideline. A short, neutral and factual message was issued along the "official channels"of the Dutch seakayaking-organisations and a more thoroughly report was announced.

The incident gave rise to a discussion within the committee about the blogging activities of some of their members. Although my weblog-activities are strictly on personal title: it's the same person writing who is in charge for NKB-seakayaking... I do realize this and try to keep things apart - when needed. It's good we have this discussion once in a while. It's good to be aware of one's responsibilities. But I admit that thinking about what I can write and what I can't write sometimes takes a bit of the spontaneity. In combination with the other factors this made me rethinking my intentions with this blog. It started 6 years ago with the idea of an easy method for sharing pictures and reports with the people I paddle with. In the beginning it was a blog in Dutch only visited by a small number of fellow paddlers. Soon it grew into this exercise in writing a kayak-dairy in English, visited over 100.000 times by people worldwide...

The idea of sharing experiences and pictures is still leading. But I think it's time for a refreshment. Back to the roots - more room for pictures, shorter and more spontaneous messages and back to the interaction with fellow paddlers. Nothing wrong with a bit of ambition ;-)
Lasty week I started gently with a slight restyling of the blog (more space for pictures) and I am exploring how to make it more direct, responsive and interactive - I am thinking about integrating the blog into facebook or another social network. It will take some time before changes take place, and there will also be a period of silence again (holiday in the Alpes . My short term intention is not to bore the reader with text as long as this one ;-)