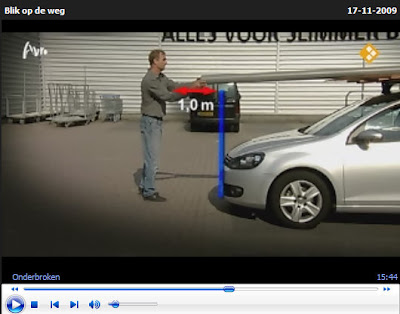 Good news for Dutch (sea)kayakers driving a compact car: Dutch traffic-rules on transporting large loads on a vehicle have changed. Before May 1st, 2009 it wasn't allowed to drive with a long load that sticks out of the front of the car. For an owner of a compact car this made it difficult to transport a 5 meter-plus seakayak on the roof (safe and) legally. According to the new rules long indivisible loads are allowed to protrude the car on front and back side both up to 1 meter. Also the (for kayaks non-realistic) obligation to attach a large red/white sign on the end of the portruding load has vanished.

The new rules have been largely unnoticed. On last weeks' episode of the Dutch TV-program "Blik op de weg" an item was dedicated to this issue. The item starts in the 15th minute of this
streaming video.
Geplaatst door Hans Heupink op 17:00 2 comments: 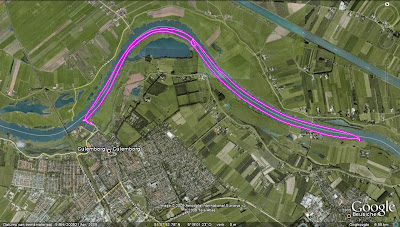 Early this morning I went to Culemborg to join the local hard core winter-paddlers on their weekly training paddle on the river de Lek. On the Lek I met Ad, Anneke and Peter. Culemborg is located in the middle of one of the most beautiful stretches of the traditional Dutch river-landscape. How fascinating it is to experience this landscape from the riverwater-level is a well kept secret amongst the paddlers of Culemborg. 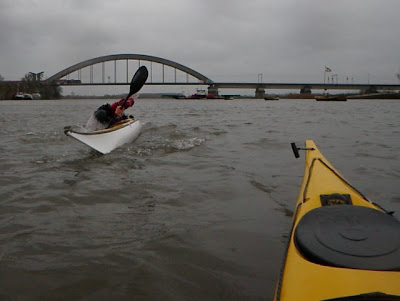 Ad invited me to paddle in his Valley Nordkapp-LV kayak. The Nordkapp-LV is totally different from the classic Nordkapps types HS and HM I paddled before. First impression: I liked the confidence giving, responsive and comfortable kayak. The ocean-cockpit with thigh braces integrates a kayaker of my size (1.82 m, 73 kg) perfect in the kayak. It offers good control with the knees spread under the tigh braces, and is also pleasant to paddle with the knees held together. It's easy to paddle the kayak on an edge, it reacts lively on edging and I found it very manoeuvrable, but also paddling good on the straight line. Rolling the Nordkapp LV is fun (though the water of the river Lek is getting cold: 9 degrees Celsius) with good control and quick respons. I can't say anything serious about the speed of the kayak, GPS indicated a cruising speed up to 12 kmh, but that's downstream on a floating river. I had to work to keep up with the rest of the group (paddling in North Shore Mariner) but that probably says more about my condition or the decent pace the guys of Culemborg are used to paddle!
What I didn't like about the kayak was the location of the cockpit-rim on the backside of the kayak. Despite the relative low back-deck of the kayak, the cockpit-rim hinders comfortable laying backwards on the deck. I suppose it's too close located to the position of the seat. The cockpit-rim didn't hinder backwards rolling because I compensated the freedom of movement by lifting my bottom form the seat, but it would be more comfortable when the cockpit rim would have been lower or a bit further away.
I did paddle the Nordkapp-LV only this morning on the river, but it made a convincing first impression. It's no replacement for my broken Anas Acuta, but it would be a very versatile alternative for the Pintail? ;-)
Keep on dreaming - I am still in the mourning process of my good old kayak... 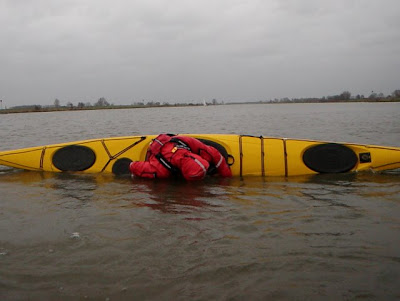 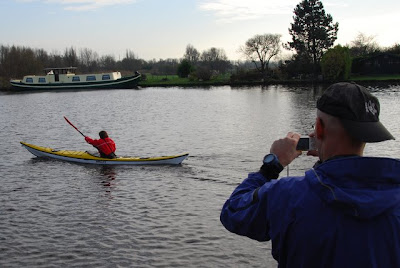 Uithoorn, November, 21th.: the yearly meeting of the Dutch seakayak-coaches. Axel Schoevers and Nicole Bulk gave a Workshop on using video analysis in coaching seakayakers. Axel learned us how to integrate video-techniques effectively in the coaching progress. With simple means it's possible to get great results, but for optimal effect some attention to technique, organisation and execution is required. 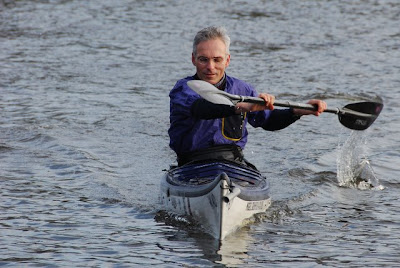 A very helpful tool for analysing the video shots is the freeware program: Kinovea. Nicole Bulk (successful Dutch kayak racer: multiple medallist in K1-K4 flat water racing, former coach of the Dutch Women selection, etc.) joined our meeting and gave advise on coaching paddlers with the forward stroke. Nicole helped us a with the interpretation of the filmed kayaktechniques and learned us how to translate this to effective coaching. 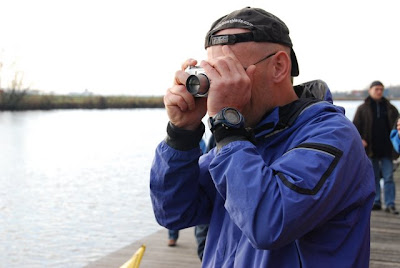 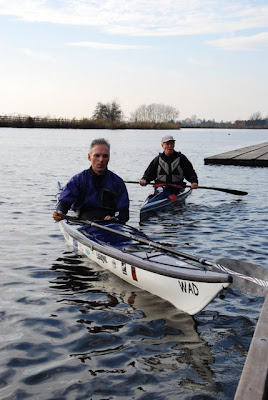 And finally: the update training is also a meeting: a social event where Dutch seakayak-coaches meet their colleagues in a relaxed context. 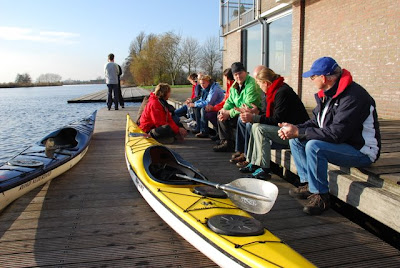 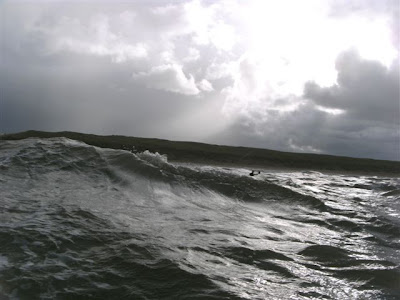 Picture by Anoushka Hulst
The guys (and girls) from kayakclub Uitgeest are teasing me with invititations for surf-paddling almost every week. I regret I haven't got the opportunity to join more often, but do intend to go to Castricum beach whenever possible. So guys, please keep sending these invitations! This weekend my kayaking activities were limited to giving classes in a swimming pool at Sunday afternoon.
Anoushka reported: "Castricum beach: Saturday surf was fine again. Steep waves in the morning. Not suited for seakayaks, good for ww-kayaks."
I have a yearning: Woerden at the sea.
Geplaatst door Hans Heupink op 22:08 No comments:


Alex and I got very dirty today. We biked along the MTB-trails of the National Park "Utrechtse Heuvelrug". The scenery was beautiful, with the wood still in a colourful autumn-dress. The track was very muddy after some rainy days. By linking the bike-trails of Leersum and the Amerongse Berg you can bike 35 km non-stop off-road, mainly singletrack, good for an intensive tour of 2 hours.

Information on all Dutch official (permanent) MTB-routes on MTBroutes.nl.
A map of the routes on the Heuvelrug can be downloaded from the website of de Utrechtse Recreatieschappen.

The video-clips are the result of an experiment with the High-Speed mode of the Olympus Tough 6000 and edited with film-modus of Picasa - I am discovering new options of Picasa every day.
Geplaatst door Hans Heupink op 23:52 No comments:

The Voordelta with off-shore wind 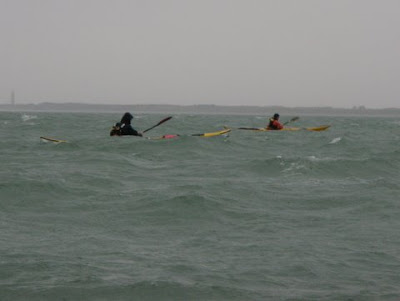 On the calender of NKB-seakayak-committee a surf clinic was announced for this Sunday. It's always a bit tricky to promise surf-activities - especially with a calender that's made a year in advance. And though it looks as if I am quit close with Aeolus (=the ruler of the winds in Greek mythology) lately (since months I enjoy strong wind every time I paddle at sea), today Aeolus was angry with me. The weatherforecast for coastal waters said for today: 5-6 Bft SE, increasing to 7-8 Bft SE, later veering West and decreasing to 5-6 Bft. No shortage of wind, but there are very few locations in our region where easterly winds create surf conditions on the beaches... And I've learnt last week to be careful to I invite people with seakayaks for a surf-session. Anyway: 5-8 Bft. is definitely to much!

So, no surf today - which of course was a bit of a disappointment for the 10 people that subscribed for the clinic. I had to look for an alternative. In general you can argue if it's wise to paddle at sea with a gale warning for 7-8 Bft. The great thing about the Voordelta however is that it offers some relatively sheltered areas. And I had also the extra support of Axel and Govert, 2 experienced NKB-seakayakcoaches, for guiding this trip.
On the water the wind turned out to be less fierce as predicted ("only"5-6 Bft in the end in an occasional squall perhaps tipping 7 Bft.), but the wind stayed quit easterly all the time - which means it was an off shore wind. Although it was tempting to paddle with a following wind - we only did this for about 20 minutes (of the 4 hours we were out on the water). With the coastguard warning for 7-8 Bft. SE on the radio every hour, I didn't dare to paddle too far away from the shoreline. It could have got a real tough struggle to reach land again...

Pictures of the day in the Picasa-album.
Geplaatst door Hans Heupink op 21:16 1 comment: