Together with Axel I visited the first poolsession of the season by kayakclub "de Kromme Aar (Alphen a.d. Rijn)" this evening . We had fun rolling and playing in crystal-clear, warm water.
Thanks to Axel for filming me rolling his NDK Romany seakayak.

Geheimtip/inside-tip: the Romany is a great seakayak to roll. Also for greenland-style-rolling and trick-rolling - in my honest opinion there are few kayaks (even dedicated greenland-style) that beat the Romany in this respect!
Geplaatst door Hans Heupink op 22:01 No comments: 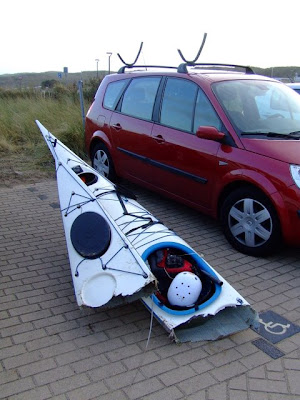 The weblog "Kajaksport op groot water" never had as many visitors as this week, after the post about my crash with the Anas Acuta seakayak. In Dutch language there is this expression: "Geen beter vermaak dan leedvermaak" which means something like "the best joy is on the misfortune of others". In this case that's far too negative and definitely not deserved - on the contrary: comments and e-mails showed sincere commitment and sympathy. Thanks to all of you for this heartwarming support!

It took some days before I started to realize how lucky I was last Sunday. Well, my kayak is broken, but I am not injured myself. It could have ended much worse. This was really a big smash...
And I am glad to notice my conclusion of this fantastic kayak being a total loss, was premature. I received multiple comments about the chances of repairing the kayak. The damage looks dramatic, but there is good chance it can be fixed. I don't think I have time and space (and doubt if I really have the skills) to do this myself, but I've also received some good addresses. I will contact them and inquire about the possibilities. Sorry for the people who showed interest in the remains of the Anas Acuta - I'll first investigate if I can have it fixed myself. You'll hear from me later.

What did I learn from this incident? Could I have prevented the damage?
- First of all my respect for the power of the sea has grown. I lightheartedly thought I could deal with the "wall of water" that suddenly rose before my eyes. And dived into it with confidence...
- Tom suggested to capsize deliberately before the wave gets you. And to roll up after it has passed by. I suppose this is a good strategy - your upper body will work like a kind of anchor and prevent the kayak from gliding backwards. Perfect. Alas: last Sunday my mindset was different: I wanted to play with the waves and didn't want to hide for them.
- A seakayak is less robust than a white-water-kayak: I should have taken this into account and should have adapted my strategy: paddling more on the save side not taken every challenge. Though I still find the Anas Acuta to be the one of the most playful rough-water kayaks: my Anas Acuta is a lightweight full-Kevlar-Carbon kayak which makes it more vulnerable.

Said all this I still find the way the kayak was broken with a sharp cut in two pieces curious. Bow and stern are completely intact - at the moment I was flipped over backwards I didn't notice any impact with the bottom of the beach. (I am sure that would have hurt my back). It looks like the kayak collapsed at the moment it landed upside down (with the deck first) on the water. Very strange.


This weekend I'll paddle my "good old" Pintail with the NKB-seakayakclinic at Sunday - wind is said to increase, but for rough water and surf it would be good if it would be veering a bit more Westerly...

The sad end of a fantastic seakayak ;-( 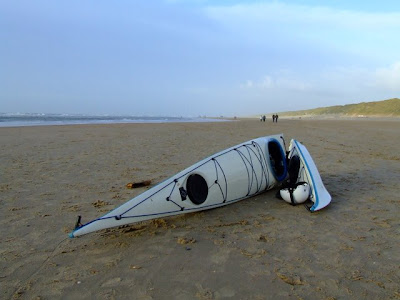 This afternoon I went to Castricum to paddle in surf conditions again. Two weeks ago I had a hard struggle to break through the dumping surf with the ww-kayak, but today wind was less powerfull and I decided to take the Anas Acuta seakayak. I love surfing with this kayak. It really was much easier to break out through the surf zone and to reach the bigger stuff a bit further away from the beach. Paddling (=surfing) back to the beach I enjoyed nice surf-rides, steering and bracing with the paddle left and right, flipped over and rolled up. After this warming up, and even more confident I turned around and paddled out again for a second ride. But then a giant monster-wave rose in front of me. It was too late to let it break or to step aside, so I decided to enter it with power. Alas: my power was nothing compared with the power of this wave. The wave set 5 meters of kayak vertical and flipped me over backwards. It felt as if I was thrown through the air and then I was smashed in the water again (upside down). As I tried to roll up, the stern of the kayak didn't follow the rest of the kayak. A second wave came over me and, as I noticed I had no control over the kayak any-more, I did a wet-exit. The kayak was broken in the middle, just behind the cockpit, only the deck-lines kept the two pieces together.
Anoushka had seen what happened and soon came to rescue me. With one hand on the stern of her kayak and the other hand on the stern of my broken kayak I swam and Anoushka paddled me back to the beach. 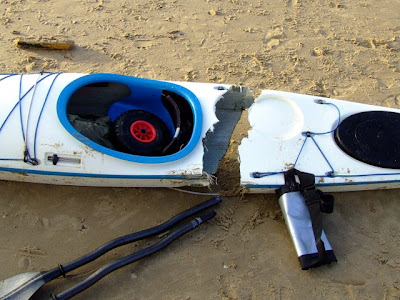 Well, the cartwheel (NL: radslag) looked spectacular according to my friends, but that is only a weak consolation at the broken Anas Acuta. I was so happy with this kayak. I am afraid this is a total-loss ;-( 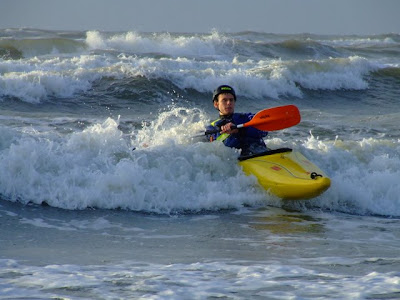 Nevertheless: it was a fantastic paddling afternoon, with perfect surf-conditions and in good company! We had a lot of fun. 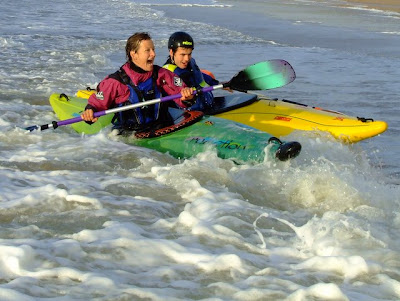 I am looking forward for the next time (but I'll think twice before I do this with a kevlar-carbon seakayak-again - duur leergeld...).

There is more than kayaking: cycling... 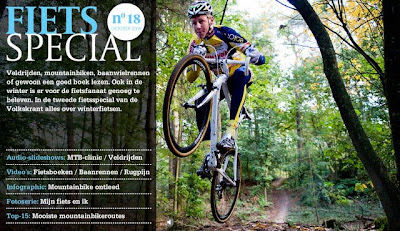 Regular visitors of "Kajaksport op groot water" may have noticed I am a rather passionated cyclist. So I was pleasantly surprised with the weekend-supplement of the Volkskrant-paper this morning: a special dedicated to Cycling in winter. The special is supported by a website with nice slideshows and video's.

Cycling is a perfect completion to paddling - and (in a limited time) cycling is the more effective workout to keep fit...
Geplaatst door Hans Heupink op 22:15 No comments: 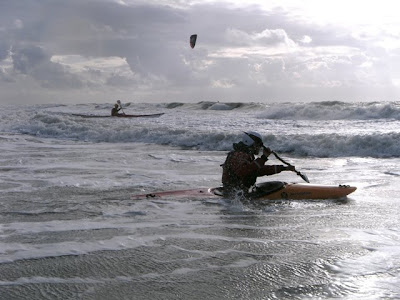 Anoushka, Annet and Rob were so kind to share their pictures of last Sunday. Axel also published his report of the surf session on the web. And René has written a post about his impressions of the Cetus-seakayak in surf in his Kajakblog. 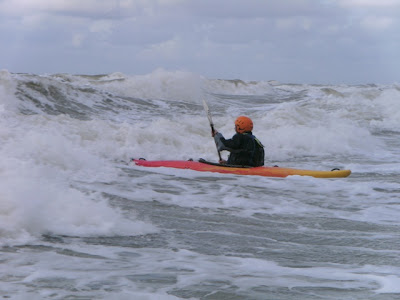 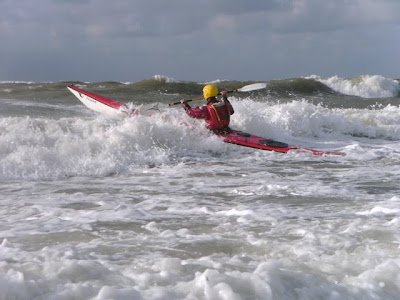 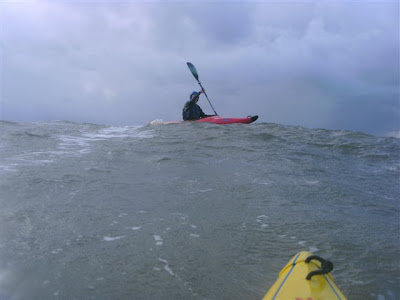 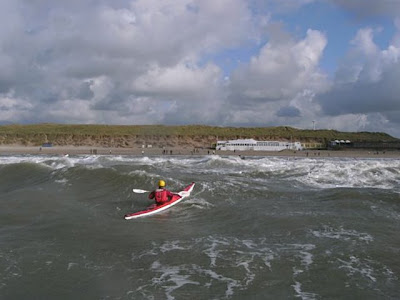 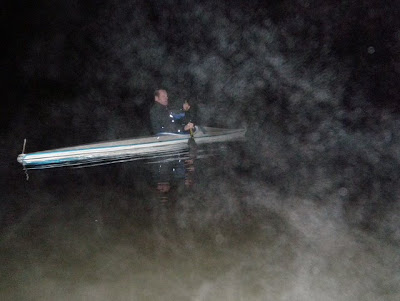 Paddling with Guus on the Grecht 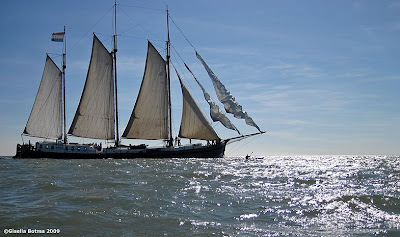 Well, it wasn't a photo-contest, but the winner is...
The Webalbum of the NKB-Vlielandweek is still growing: now 782 pictures are uploaded in 13 albums.

I remember paddling next to Gisella at the moment she made this picture of Gerard in his kayak in front of the sailing ship. Gisella was lyrical about the light and the composition - well deserved: she perfectly captured the atmosphere of paddling on a lazy afternoon along the Vliestroom on the Waddensea. Nice picture!
Geplaatst door Hans Heupink op 17:11 No comments: 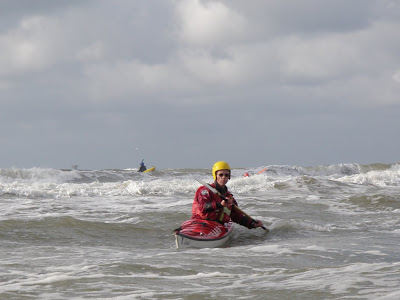 René, Anoushka and Annet (hard to find...)
First Anoushka sent me pictures of the surf session I missed last week. A few days later she sent a mail with this quote:
"It won't be like last Sunday. But like next Sunday it will never be again too! Meet you Sunday at 3PM at the beach of Castricum aan Zee."
I couldn't resist this invitation and joint a select group paddlers of KV Uitgeest this afternoon. Axel was also present with the new Mega Neutron surfkayak. René came with the Cetus seakayak to test in surf conditions. I paddled the Perception SPARC and had a hard job getting this low volume ww-kayak through dumping surf - impressive waves, up to 6 feet... And Anoushka showed all of us what surf-paddling is up. Thanks for this great workout! 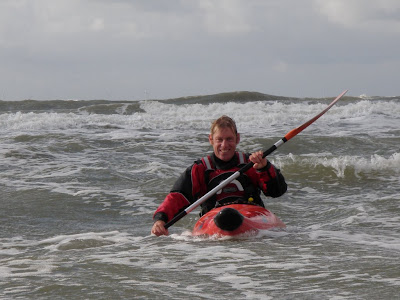 Wieger. What's missing in this picture?
More pictures in the Picasa Webalbum. All pictures are taken with the Olympus Tough 6000 WP-camera, just returned from Olympus Service Center. I must say Olympus Netherlands' aftersales service works perfect, fast and adequate. It's only a pity it's that often needed with this camera...

A surf session to the limits...


...in this amazing video clip of the "foam boaters":

The Wet Dream Result Trailer
This is the trailer for the full video, "Wet Dream Result," a film of vast importance to all humanity, and a tribute to those who push the limits so hard that the limits are like, "Ow! Stop pushing...

What we missed: yesterdays' surf

Pictures by Anoushka H
Anoushka sent me a set of jealous-making pictures. While our group cancelled the plan to go paddling along the North Sea coast, Anoushka and her friends from KV Uitgeest enjoyed a surf session at the beach near Castricum. They say it was "gaaf en heftig" ("awesome and violent"?) - I do believe!
Geplaatst door Hans Heupink op 20:54 1 comment: 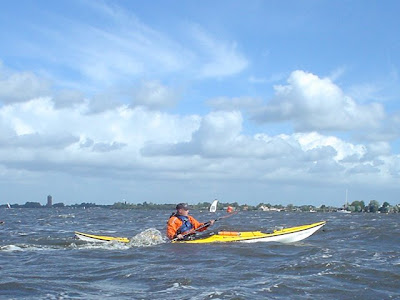 It has been a time ago since the last time this weblog was updated. Main reason is I am suffering a little "kanodip" lately. A "kanodip" is a periodical lack of motivation concerning kayak-related activities ("in een dip zitten" is a Dutch expression meaning: "to go through a bad patch"). Don't worry: it's not dramatic - it's temporary by definition. This particular kanodip concerns more the fuzz around kayaking, than the activity in itself. As I discovered earlier, the best therapy to recover from a kanodip is to go out paddling and to enjoy the outdoors. So Hester did a good thing for me when she invited me for a day kayaking with the Wageningse Kanovereniging WKV ;-)

Kaat and Theo were in charge for organising todays' activity of the WKV. Planned was to play in the surf at the beach near Langevelderslag (Dutch North Sea coast). But after a stormy Saturday (wind 7-8 Bft., waves up to 6 meters high on the Northsea...) Kaat and Theo wisely decided to change plans and to paddle on an inland-location: the Westeinderplassen. The wind created nice waves to surf with a following wind over this stretch of 6 km open water. Perfect conditions for experimenting with stern rudders and edging the kayak.
I was really pampered today, my friends from Wageningen even came to Woerden to collect me with my kayak at the doorstep of my home. Thanks guys, I enjoyed a perfect paddling-day in great company! 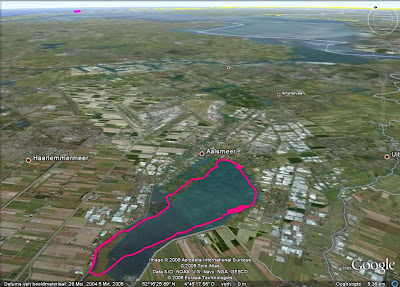 More pictures in the Picasa webalbum. The Olympus Waterproof camera is in repair (again...) - today's pictures are made with the much more responsive and robust old Sony Waterproof camera. Downside of the Sony camera is that it lacks a lens cover - quit a lot of todays' pictures are blurred because of water-drops on the lens. I can't blame the camera for that - I shouldn't be rolling when I want to make pictures...