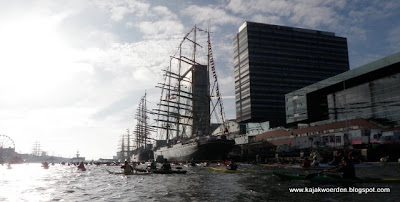 Bringing a salute to the tall ships of Sail on the Saturday morning has become a tradition, organised by the 3 kayakclubs of Amsterdam on every edition of Sail Amsterdam. This morning a group of 380 kayaks and canoes paddled along the imperessive Sail-fleet in the IJ harbour in Amsterdam, under escort of the water-police. 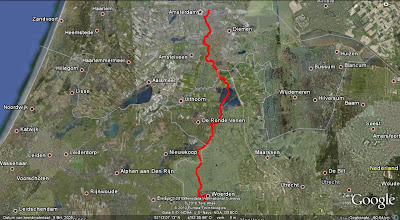 I got up early to meet Natasha, Hanny, Nynke, Paul and Jan at 6 AM at the boathouse of KV Wyrda - the local kayakclub. We loaded 2 canoes and my Tahe Greenland-kayak on the clubtrailer and drove to Amsterdam: the kayak-salute was scheduled from 8.30 till 9.30 AM. After the coffee at the Amsterdam Marine Emplacement I said bye to my kayak-friends from Woerden and slipped back into the Greenland to paddle home to Woerden. Starting in the canals of Amsterdam, I paddled a long list of Dutch rivers and canals: Amstel, Bullewijk, Waver, Winkel, Vinkeveense Plassen, Ringvaart Polder Mijdrecht, Wilnisse Zuwe, Heinoomsvaart, Kromme Mijdrecht, Kamerikse Wetering, Grecht and Oude Rijn. A nice trip through the Green Heart of Holland: it's amazing how close the countryside is to the Dutch capital...

More pictures of the Kayak-salute to Sail 2010:

Back on the water - in Woerden 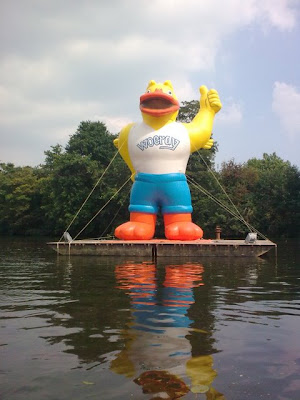 Woerdy: the mascot of the local youth summer-activities
Back home from hiking, biking and climbing in the Alps. After 4 weeks of abstinence I felt the urgent need to go for a paddle and to check if it still works: the paddling thing. Well, I am not disappointed: I could keep up with Guus ;-), a little training for the longer distances would be fine though (next Saturday 65 paddling-kms on schedule..), the rolls still worked.

On the local water some changes: temperature of the water has risen (fine for rolling), the water has also got a bit smelly and green (not so fine for rolling, keep the mouth shut and nose and ear-plugs in...), and Woerdy has come.
Geplaatst door Hans Heupink op 19:01 No comments: