The Xcite is designed as a fast yet manoeuvrable coastal touring kayak. According to its designers the kayak is "at home playing in rough water, equally comfortable carving turns through rock gardens, the Xcite has ample storage for week long trips. Its high stability and quick turning response make this boat a joy for those paddlers looking to improve their skills and take on advanced conditions".

During the paddling week in Spain with Lieke, I paddled a (black and white) Tiderace Xcite Classic, one of the Test-kayaks of SK Kayaks in Llanca. A week is too short for a full review, but I spent enough hours paddling the kayak for a good impression.

Fitting the kayak on the beach, I was impressed by the volume of the Xcite, and a bit afraid it might be too voluminous for me (1,82 m, 73 kg) - as I was planning to do in Spain mainly day-trips with the kayak. Once on the water the high volume was immediately forgotten: due to the ergonomics of the cockpit, the contact with the boat is excellent and the hull shape with a lot of rocker the Xcite is very responsive on body movements (edging, leaning) and paddle power. It accelerates quickly, it is reactive like a much smaller kayak, but it has the cruising speed of a 17 foot-kayak. The kayak is easy to roll: the low back deck makes lay-back rolling easy, the high knee position facilitates forward-rolling. The large cockpit is a delight on rocky shores: it's very comfortable (and safe) to be able to get your legs out of the cockpit before landing! At the rougher moments (winds up to 5 Bft.)on our trip, the boat tracked well in wind, wave and chop.

From the first moment I found it a pleasure to paddle the Xcite. After a week I started to appreciate it even more: it's not only a playful boat that gives confidence in the rough stuff, but also a comfortable tourer with enough load capacity and a appropriate cruising speed for long camping trips. It does what the designer promises!

About the built quality: the finish is excellent. The test-kayak was a "Classic" - (=Tideraces standard), featuring a high tech lay-up with reinforcements and coremat constructions to increase stiffness on the critical spots. This results in a very stiff (and probably strong, but that's difficult to examine for a simple tester) yet light kayak.

Tiderace wasn't represented in the Netherlands for a long time, just recently the Kanoshop started a dealership. Congrats to Wendy and her team ;-) 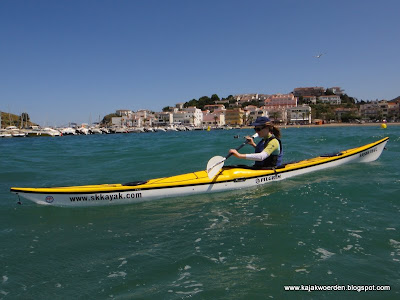 The Pilgrim is designed by SKUK (Nigel Dennis kayaks) with the smaller or slimmer paddler in mind. Viewed from a distance the kayak looks like a shrunken Romany or Explorer. It shares much of the characteristics of these larger brothers in the SKUK kayak-range. The hull shape, the shape of the deck, the lay-out of the decklines, the key-hole cockpit, the sloping bulkhead, the position of the skeg-control – it’s all familiar, just quite a lot smaller: the Pilgrim 480 cm long, 50 cm wide and has a total volume of 250 l (especially this last figure is very low, compared to a standard seakayak).

Lieke is a slender teenage-girl (ca. 1.70 m long, weight below 50 kg). She is rather sporty, has a good endurance, but she is not very strong and she hasn’t got a lot of seakayak-experience either. She paddles occasionally with her father, but not very often: kids need time for their own hobbies, sports, friends (and school ;-).

To be short: Lieke managed exceptionally well to control the Pilgrim. She could easily turn the kayak around in a few paddle strokes. She also had no problem to hold it on a course, even without deploying the skeg. Mostly we paddled in calm conditions, but occasionally the wind increased and we paddled in winds up to 5 Bft, in waves of 2-3 feet high and even met some clapotis on the headlands of the rocky Costa Brava shoreline. In all conditions Lieke was comfortable in the kayak. The more lively the water got, the more fun she had with it. For one part this will be due to the “unlimited confidence” of a daughter in her father, but I think for the bigger part this is a compliment for the designers of the Pilgrim. Lieke was paddling with the kayak, not the kayak with her. The team of Nigel Dennis has done a successful job in creating an expedition-ready kayak for the smaller paddler!

About the speed of the kayak: Lieke herself was sometimes a bit disappointed that she couldn’t paddle as fast as her father did. But that’s not a fair comparison: I am (older), larger, stronger, more experienced and trained in paddling - and I was paddling a kayak with defintely a longer waterline. Lieke paddled a decent pace and covered (untrained) easily distances up to 20 km a day. I think this says enough about the glide of the kayak.

The yellow Pilgrim test-kayak is a standard SKUK dioleen copy. This stands for a straightforward layout, solid and rugged. It was no problem to carry the Pilgrim on the shoulder – compared to my own kayaks this is a light kayak. Of course that will be more due to its size than because of the layup. All the hatches stayed bone-dry and the skeg functioned flawless. 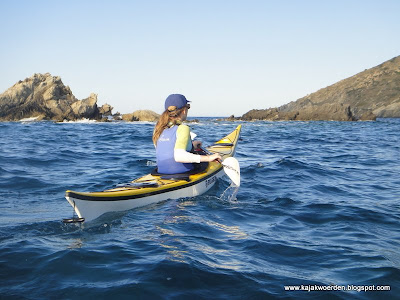 In the Netherlands SKUK kayaks are distributed by Zeekajaks.nl (Axel and Nico).
Geplaatst door Hans Heupink op 22:47 No comments:

A brief impression of 2 British-style seakayaks 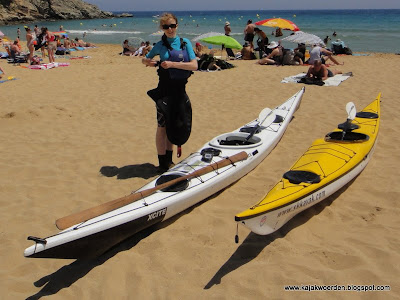 Lieke and I were “travelling light” on our recent kayak-holiday in Catalonia. We didn’t bring along our own gear, but we rented kayaks and equipment at the local seakayak-centre. Pau and Marc from SK Kayak in Llanca provided us with excellent gear. We paddled 2 kayaks of the demo-fleet: a SKUK Pilgrim for Lieke (the yellow kayak on the picture) and a Tiderace Xcite Classic for me.
Paddling along the Costa Brava was a nice opportunity to get familiar with the characteristics of the both kayaks. The next 2 posts are dedicated to the kayaks we’ve paddled – please don’t call it a test, it’s just a brief personal impression.
Geplaatst door Hans Heupink op 21:21 No comments:

Butterfly roll in the Mediterranean Sea

Originally I planned to go paddling in Scandinavia with Lieke, my 15-year old daughter. But the weather-situation two weeks ago, changed the plan: the Mediterranean Sun looked more appealing for a relaxed holiday than the unsettled weather in Northern Europe. In the last minute we booked a flight to Barcelona, rented a car and went paddling in the North Costa Brava. We camped at the campsite of Port de la Vall. Kayaks and paddling-gear were kindly provided by Pau and Marc from SK Kayaks. We enjoyed the overwhelming hospitality of our friends of Club Pagaia, the warm weather, the crystal clear water and the stunning coast of Alt- and Baix Emporda. The last 3 days of our holiday we visited the amazing Catalonian cities Girona and Barcelona. Father and daughter had a great holiday!

The most recent issue of Ocean Paddler Magazine (nr. 26) covers an informative article with great pictures about seakayaking in the Cap de Crues region: "The Kingdom of Tramuntana".
Geplaatst door Hans Heupink op 22:23 No comments: