Balance on the rope 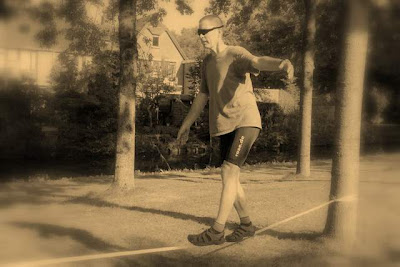 bal·ance (′bal·əns): ... a state of equilibrium or parity characterized by cancellation of all forces by equal opposing forces..
Slacklining is the sport of walking on a small, flat nylon rope between two fixed points. It is practised in the backyard, on school campuses and city parks, and even 3000 feet above the ground. Some people do it for fun, others for the obvious athletic benefits, and others still for a meditative purpose, in seeking a higher state of mind (?!). The origins of modern day slacklining are generally attributed to the rock climbing scene in Yosemite Valley, California, in the early 1980s. At the NKB-Kajakfestival in Zoetermeer a few weeks ago I had fun with my kids with the first steps on the slackline. And as I am that kind of dad that selects gifts for his kids primary to satisfy his private pleasure - the family is now slacklining in the streets of Woerden.
The link from slacklining to (sea)kayaking is a bit artificial - though balancing on a rope as a sport is - in a bit other setting - invented by the Inuit long before slacklining. The Inuit did this to entertain one another with feats of strength during dark, frozen winters, to maintain the tough and demanding level of fitness required for the dangerous occupation of hunting sea mammals by kayak and as an on-land teaching exercise for learning to roll a kayak. The sport is called: "qajaasaarneq" which means "like rolling a kayak". My first introduction to Qajaasaarneq was on the Anglesey Sea Kayak Symposium in 2003 where Maligiaq gave a demonstration at the campsite on a rope fixed between two vans. Last week I received from Tom Sharp the instruction DVD of Dubside on Qajaasaarneq. With the clear explanations and detailed instructions of Dubside the highly gymnastic rope exercises suddenly look manageable - even for an average guy like me (sitting on the coach behind the TV..). So now I am figuring out where I can find a good spot to fix a rope - indoors would be great - but the living room is to small (and fragile). Outdoors in our street is a bit too embarrassing to start. You shouldn't share everything with your neighbours - public slacklining was enough for my reputation...

oh Hans…. i imagine that you feel passion by Qajaasaarneq. That pity don't play ropes in Vlieland. Don't worry about the neighbors, they see mine me in the terrace of house in Barcelona and they already know that I am rare. Best regards, Marc. A Spanish in Vlieland

Hi Marc!
Thanks for your support. I'll tell my neighbours ;-)
Greetings,
Hans