A tribute to a sea hero: 1. Abel Tasman 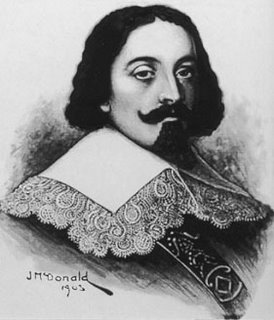 In March 1606 the Duyfken, a small ship owned by the Dutch East India Company (VOC), that had been sent out to explore the unknown waters south of New Guinea, chanced upon unknown territory. The continent that captain Willem Jansz had “found”, was Australia. 2006 marks the 400th anniversary of the first Dutch contact with Australia. The year is celebrated both in Australia and the Netherlands.
Today, at a symposium called "The Dutch Downunder" in the building of "de Tweede Kamer" (the Dutch house of parliament), a special edition of the original Journal of Abel Tasman's first voyage to the South Land is presented. The old Dutch text is translated in modern Dutch, this makes the report far more accessible to the modern reader. I have read some pre-edited paragraphs. The adventures of Abel Tasman and his crew are fascinating!

In 1642 the VOC made Tasman the commander of an expedition to the South Land. Anthonie van Diemen, the governor-general of the East Indies, ordered him to determine the size and exact location of the South Land and to sketch everything he saw. The expedition’s other objective was to find a passage to the Pacific – in other words a route to South America through Australian waters.
Two vessels were fitted out for this voyage. The Heemskerck, with a crew of 60 ‘stout fellows’ served as Tasman’s flagship. The Zeehaan was under the command of Gerrit Jansz. of Leiden and Isaack Gilsemans, who besides representing the VOC was also a skilled draughtsman. He was instructed ‘perfectly to chart and describe all lands, islands, promontories, bights, inlets, bays etc. that you encounter or pass’.
From Batavia Tasman sailed nearly as far as the Cape of Good Hope, before turning for Terra Australis. On 24 November, by chance, he came across an island which he called Van Diemen’s Land after the governor-general. It was not named Tasmania, after Tasman himself, until many years later. Continuing eastwards, on 13 December he sighted New Zealand, which he called Statenland because he thought it formed part of the land mass south of Cape Horn known by that name.

Illustration Murderers' Bay -from the Journal of Abel Tasman, 1643
The various encounters between Tasman and his crew and the indigenous inhabitants of New Zealand did not always go off peacefully. A clash with Maoris claimed the lives of four Dutch seamen and an unknown number of Maoris. The place was entered in the log as ‘Murderers’ Bay’.
Abel Tasman’s first voyage was undoubtedly the most important of all the Dutch voyages of exploration to Australia. Nonetheless, Tasman’s expeditions brought an end, for the time being, to the VOC’s efforts to find out more about Terra Australis. The Company expected little from the continent and regarded further expeditions as a waste of money.
Geplaatst door Hans Heupink op 22:52

The oldest boyband in the world "The Dubliners" also sing about Van Diemen's land. Where you end up if you do not obey the Law.

I worked myself in Fremantle (Near Perth) for a few months. In the Maritime Museum you will find remains of the Batavia. And a few miles outside the coast you will find Rottnest Island.(rattenest)
All names and places given by the Dutch Seafarers.

That was a few hundred years ago, still now the Dutchies are re-discovering new places.....by KAYAK