Saturday 20-5-2006
The meeting with the group at the slipway in the harbour of Neuharlingersiel was planned at 2.00 PM. It’s a 350 km-ride from Woerden to Neuharlingersiel, so starting the trip at 9.30 AM should have given more than enough time. Yet it became a close finish. We arrived exactly at 2.00 PM. Navigation on the road requires some attention, we missed an exit and almost finished in Cuxhaven... It’s a shame: two kayakcoaches 40 degrees and 30 miles off the course..… 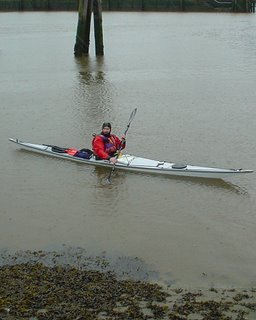 Everybody arrived in time in Neuharlingersiel and started unloading the kayaks and sorting out the gear. Rolf (touring-guide from the SAU) was in Spiekeroog and arrived in style by seakayak in Neuharlingersiel. He paddles a unique kayak: self-designed and -built, inspired by the original hard-chined Greenland kayaks. I love the looks (later I made a test paddle: it made a good impression).
It was rainy and windy. We used the waiting-room of the ferry to make acquaintance with the members of the group, and divided the group in two sub-groups for the crossing to Spiekeroog. As we departed at high tide at 6.00 PM wind was decreasing and we had nice paddle to Spiekeroog under a threatening dark sky. 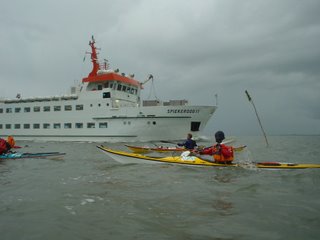 Sunday 21-5-2006
Seewetterbericht Deutsche Bucht 6.40 AM: SW-5/6 Bft, later 7 Bft
High Tide 6.42hr, Low Tide 13.02hr
Due to the weatherforecast we made a slow start. Conditions proved to be better than expected: 4-5 Bft. We used first paddle to get familiar with wind and waves from different directions and paused at the north side of Langeoog. 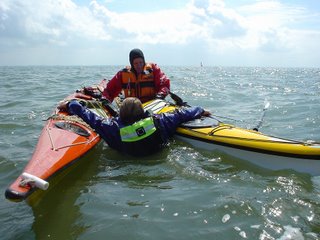 After the turn of the tide we paddled back to the beach at the campsite were we did the full program of recoveries and rescues. German-Dutch communication was very intense with the rescues… And that was not only because the German participants were not used to the Dutch that didn’t have their paddles on a leash…
The evening program in the old rescue-boathouse was dedicated to trip-planning. 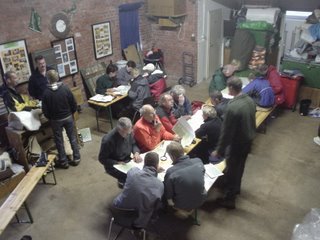 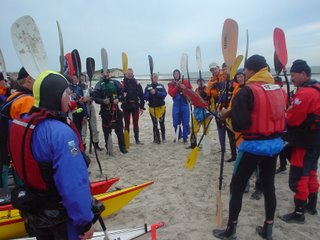 On the water towing under rough conditions was the main issue. I paddled with my group further out at sea, but wind and tide were that strong that we hardly made any progress. In the afternoon we sat in the boat-house again for a First Aid lecture by Stephen.

Tuesday 23-5-2006
Seewetterbericht Deutsche Bucht 6.40 AM: Gale warning, SW-7/8 veering NW, decreasing 5/6 Bft, later SW 6, gales
High Tide 9.10hr, Low Tide 15.27hr
You get used to everything, even to horrible weatherforecasts. We noticed that everyday after midday wind decreased. So this morning we started in the boathouse again: to work on the theoretical exercises the SAU-participants had prepared. In the afternoon we paddled out to the Robbenplatte to exercise landing in the surf zone. Everybody enjoyed playing around. On the way back Stephen simulated an accident. Kaat acted immediately, but Stephen had learned a lot of the Dutch kayakers and annoyed Kaat by making a mess with his paddle. The group had a lot of work collecting all the gear. At the camp-site it was raining so heavy that we did the evaluation of the day in the women toilet…