The Svalbard is back! ... and just another toggle pic 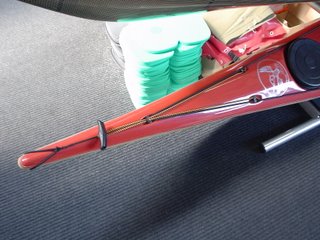 The Carfree Girls will be upset: today I made more than 150 km's by car with a kayak on top, just to do some shopping. It's a pitty that kayakshop Arend Bloem isn't any nearer to Woerden. My excuse for visiting Arend this time was the urgent need for (1) a new sprayskirt for the Valley Pintail and (2) some extra waterproof luggage bags. I must get my gear ready for the kayakcourse on Spiekeroog. Arend and his crew have seen me often lately. Sure they don't mind!

In general I am not particullary fond of shopping. One exception: the kayakshop! Shopping at Arend Bloem is a social happening, almost everytime I meet kayakfriends looking for gear. And Arend has always interesting new gear in his shop. Today it was the first Svalbard from MSC. The Svalbard is a Dutch design seakayak that Jan van der Sluis (in Holland and Germany well known for his perfection in building kayaks) built. Some years ago however, Jan stopped building kayaks for Kajakcentrum de Biesbosch. But now the Svalbard is back again. Made in the Czech Republic by MSC in coöperation with Jan, for about half the prize it did cost when it was made in the Netherlands... The first impressions of the building quality are good, finishing seems to be at least comparable to the renown British Seakayaks. Comparing with my Svalbard-kayak built by Jan, MSC has simplified some complex details like the curved bulkheads and the water draining hole at the compass-recess, but that doesn't take away from functionality.
Ok, it is not a very original idea to produce in a "low-cost"-country an old design again, perhaps it's good for the prize, but in potention it kills innovation. Said that, I must plead for MSC. They really do more than just imitate. They have added improvements and new options to the Svalbard design (like the possibility of adding a rudder, and a small day hatch in front of the cockpit), and they will also produce a complete new (Dutch design) seakayak: the Vestvika.

The picture above shows a detail of the MSC Svalbard (click on the picture to see the details). The toggles are fastened similar as I described some time ago for my Pintail: with a long single rope. Interesting here is the mounting of the elastic cord that holds the toggle in its resting postion. I did this with a short loop from the front cleat to the toggle. Problem with my solution is the short distance: I had to experiment with elastic cords of different thickness: the cord must be elastic enough to stretch from the resting position of the toggle till the pull out position. Only a thin elastic cord was elastic enough. On the MSC Svalbard the elastic cord is not fastened on the front cleat, but on the cleats in second position. This gives the elastic cord more length, so the relative difference between the resting position and the pull out position is smaller. The advantage is you can use a stronger, less elastic shock cord.
Geplaatst door Hans Heupink op 22:42

Hi Hans,
Certainly an interesting idea to fasten the elastic cords a little bit further away.
Although the rope to the toggle is single, I think it is not yet completely safe because the rope-loop at the end is quite big. It´s not that bad but when the loop is a little bit smaller it is safer; now it is still possible, while grabbing for the toggle in wild conditions, to put one of your fingers in this loop and can become entangled in it.
Excuse me for bringing in minor details like this.
Regards
René

Well, well, we're not that strict! It is nice that you think about the kilometers you drove. That's more than most people do.