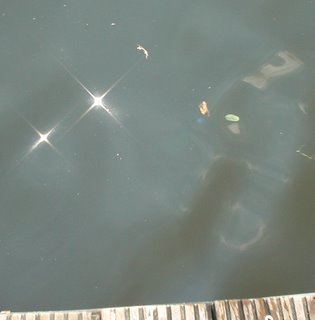 Water does not stick to national boundaries. EU member states have agreed therefore to the European Water Framework Directive (EWFD). The goal of this directive is to ensure that the quality of the surface water and groundwater in Europe reaches a high standard (‘good ecological status’) by the year 2015.
The EWFD is based on a river basin district approach to make sure that neighbouring member states assume joint responsibility for managing the rivers and other bodies of water they share. To meet the 2015 deadline, water authorities in each river basin district in Europe must have agreed on a coherent programme of measures by 2009. Where a river basin district includes more than one member state, a trans-boundary management plan must be drawn up. The Netherlands is involved in management plans for four trans-boundary river basin districts: Rhine, Meuse, Scheldt and Ems.


Warning: This blog isn't the right place to edit my 9 to 5-work frustrations. Please forgive me this exception.

This morning, with the kids at school, I went for an hour kayakrolling in the "Singel", the town canal of Woerden. We suffer a heat wave in Holland since more than a week. Lots of people are enjoying a refreshing bath in the Singel. Since the water bottom is cleaned a few years ago, the Singel is said to have “swimming water-quality”. But alas: this morning I was rolling in a green soup with a nasty smell.

A few warm days are enough to turn the nutritious water of the Singel in a potential toxic cocktail. Ok, people with some resistance won’t get sick immediately but more vulnerable people may experience headache, stomach cramps, vomiting, diarrhea, a sore throat, earache, eye irritations, a runny nose or swollen lips. People with sensitive skin may also develop a rash in the form of itchy red pimples. Enjoy your bath. And please don’t’ think it’s going to be better after a refreshing rain: Heavy and extended rainfall can occasionally overload the sewage treatment system. When that happens, untreated sewage has to be discharged into the Singel through the outfalls in the Inner-city of Woerden. In such cases, for the next two days you are advised not to swim in Singel. Oh sorry, did I say “you are advised”? Now to my first (minor) frustration: because the Singel isn’t official “Swimming water” in the plans of the local authorities there is no authority that advises the ignorant swimmers. They simply don’t know about the hazards…

My second (and bigger) frustration is that the specialists and officials (I am one of them) are concerned with the water-quality since years, making one plan or sanitation program after the other, but we don’t succeed in tackling this problem. Working since 2002 on the European Frame Water Directive, Dutch government doesn’t come any further than concluding that we won’t reach the goals of the directive by the year of 2015. To the European Commission the Dutch Minister of Water management is pleading for an exception for the Netherlands, because of our “end of pipe situation”. Of course it’s very difficult in a highly industrialized, agricultural overloaded and one of the most crowded countries of the world, to reach a “good ecological status” for ground- and surface water. However as one of the richest and most developed countries in the world we should be able to tackle this question. But we don’t manage it, because no-one, including our Minister of Watermanagement is in charge! Responsibilities and powers are divided between local communities, provincial authorities, water boards and the different departments of the national government. Every authority owns a part of the key but they all refuse to work together. That’s my main frustration. And that’s what keeps me busy from 9 to 5…

But not on wednesday: that’s my day off. And while the water was green, dark and smelling I enjoyed rolling. I had some problems with the coordination of the forward ending sweep roll, but handrolling in the seakayak becomes more and more bomb-proof. Thanks to a handy hint of Freya: sliding a few inches forward in the seat makes it easier to lay back on the deck. It’s so simple: why didn’t I come earlier to that idea?
Geplaatst door Hans Heupink op 22:05

For me, the higher the volume the more I have to "skooch" forward. At first I had to get forward in every boat, now, just the explorer. So it's coming along. I KNOW WHAT YOUR GOING THROUGH!! :)

For what it's worth I don't think it's a bad idea to vent on the blog once and awhile. It's YOUR blog after all. :)