I Shouldn't Be Alive: Swept Away 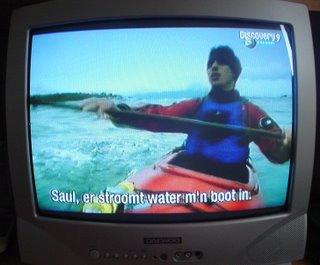 By coincidence I came over a seakayak-related item on television yesterday: an episode in a series of Discovery Channel with the “promising” title “I shouldn’t be alive”. The storyline in short:
Two best friends set off in seagoing kayaks to tour Washington State's San Juan Islands. One does not admit that he's a complete novice kayaker. Having originally met on the athletics track in school, the friendly competition that brought them together now leads them toward disaster. As night approaches, they fall victim to stormy conditions and surging currents. The novice is making no headway at all, and will soon be sucked out into the Pacific. The experienced kayaker decides to leave his struggling friend and paddle on alone. Has he gone to get help ... or is he saving his own skin?

The documentary of this testosteron-driven kayak tour is so extreme that it’s just ridiculous. Everything one shouldn’t do, is done in this story:
- starting a multiday tour at night with an inexperienced and unprepared kayaker;
- leaving to late, not respecting tides and currents;
- insufficient equipment;
- bad communication;
- leaving the victim alone;
- swimming away from your kayak in a rescue situation;
- not learning from mistakes: one bad decision follows the other;
- and much more…
Luckily the novice kayaker wore a drysuit: otherwise he would never have survived more than 6 hours in cold water.

I was struck by the stupidity of the so called “experienced paddler” and found the relationship between the two paddlers a bizarre interpretation of friendship. Though it’s a rather clumsy documentary, overdone and over dramatized, and though I hate the continuous interruptions by advertisements on Discovery Channel, I had my fun watching it.

There is a trailer of this episode on the Canadian website of Discovery Channel. The program schedules of Discovery Channels are inscrutable, with endless many repetitions: "Swept away" will surely be repeated in the next time.
Geplaatst door Hans Heupink op 23:19

Incident reports show a plentiful supply of paddlers abandoning swimmers. For Hutchinson claiming to do it for reaching outside help is most of the times a blatant excuse. I can though, think of situations where this could be explained, as a not too far shore with communications facilities. What is your take on this?

Hi Blogger, I found your blog quite informative.
I just came across your blog and wanted to
drop you a note telling you how impressed I was with it.
I give you my best wishes for your future endeavors.
If you have a moment, please visit my 30 day weather forecast site.
Have a great week!

I have been watching the programme a few times; to me it's just like a cartoon.

"Sprayskirts were not necessary bacause my friend was also not having one." and "What do you mean I had to close the waterproofbag "

All above excerpts that make you laugh, even if it was a matter of life and death.

Before Kayakking I was practicing Shotokan-Karate for ten years. Due to eye problems I stopped, and took up Kayakking.
We were always taught in the Dojo that a little knowledge is very dangerous. You can also apply this to the two in the programme.

If you are failing to plan, you are planning to fail. A zero or a hero...and a lot of other statements come into my mind.

There was a lot of talk about that episode around here when it first aired in the states. They give kayakers a bad reputation. It did'nt help that the one guy was presented as "experienced". Yikes!

Sometimes guys just take off on swimmers like Wenley said. I saw it happen once and it's weird. Like they just go blank and paddle off. Not pretty at all.

Indeed: this programme is no invitation for seakayaking.
You can argue about leaving a victim alone to get outside help. It shouldn't be! Like Wenley I think there are however situations possible where you have no other choice. But first: do anything possible to create an as save and stable possible situation for the one that's left behind! As a matter of fact a group of two can be to small to be save from the beginning (that's clear in this case..).

In the late 80's I was an active alpine climber. In that time we had very similar discussions about Joe Simpson's dramatic story "Touching the Void" in which he left his partner alone in a crevasse after cutting the rope. In situations of life and death ethics become basic. As I remember from the book, Joe Simpson made his difficult decision after days of considering survival chances for him and his partner.
In the "Swept away" story the so called "experienced paddler" made no decision. He just paddled away....
Unbelievable!

When the more able paddler left the novice behind, the latter was not yet a swimmer.

I agree that the trip was poorly planned as regards gear, but the able paddler did make the crossing. The second fellow didn't tell his friend he didn't know the first thing about kayaking--right down to the foot pegs and how to close a dry bag.

I think the able paddler, who would not have surived a long swim in his shorty wetsuit, did the right thing by leaving his companion. After all, the unwise and novice paddler did get found. And would have been found more quickly except that he made just about every error one could possibly have made.

The wisest decision would have been to scrub the trip when the novice arrived hours late, with failing light and the wrong tide. But I suppose I should be safest if I didn't leave my house at all.

Indeed: it would be a pitty if we wouldn't leave our houses at all!
It's not necessary either.

1. In the first place I think the able paddler should have asked his companion about his kayakexperiences before even planning a trip like this together. He might have been able, but in this program also the "able paddler" didn't make a "wise" impression to me.

2. In this dramatic situation where both got in, with their limited capabilities, bad outfitting, and the coastline within reach, paddling away to get outside help maybe was a good idea indeed. But not without telling the victim about this plan (and with some instruction for behaviour)!

I realize it's easy to comment afterwards and without being involved. In Dutch we say: "de beste stuurlui staan aan wal!"