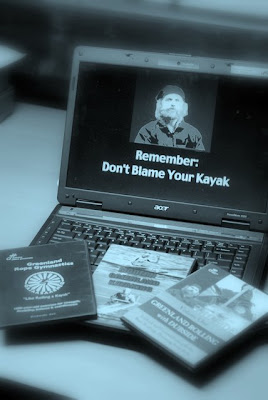 ...as for 'Over and out,' you would be shot out of the water if you used the phrase on marine radio. 'Over' means 'I have finished speaking and am awaiting a reply.' 'Out' means 'I have finished the communication.' 'Over and Out' should NEVER be used together in serious radio communication.
Several fellow kayakbloggers reported about Dubside.net closing last week. On Youtube appeared a video of Tom Sharp (video-producer and partner of the Dubside.net) speaking on the Deception Pass Dash-kayakmeeting about his motivation to stop. After finishing his speak Tom hands out the last copies of the Greenland Rope Gymnastics, Greenland rolling, and Modern Greenland Kayaking-DVD's for free to the crowd. It's a painful image.

I guess I was just in time ordering my copy of Modern Greenland Kayaking a while ago. I am sure I won't be the only one missing the good stuff of Dubside and Tom. I never met Dubside in real life and I only had a short, but pleasant e-mail conversation with Tom about the Modern Greenland Kayaking-DVD. But both guys have contributed a lot to my passion for Inuit culture and Greenland rolling skills. Thanks Tom, thanks Dubside!

My personal first acquaintance with the Greenland kayak rolling-skills was back in 2000 watching a rolling-demonstration during the Eskimoland-exposition in the Museon. In 2003 I saw Maligiac Padilla performing his fascinating skills at the Anglesey Seakayak Symposium, in 2005 Freya Hoffmeister learned me in half an hour the essentials of the layback and forward ending rolls, later I practiced greenland rolling with Axel Schoevers in the swimming pool, but it was above all the excellent explanation of Dubside on the Greenland Rolling Dubside-DVD that helped me with the finesses. And that gave me a drive for many, many joyful rolling-training hours! The video's of Tom and Dubside are basic and essential - made with a very infective enthusiasm. I was eagerly awaiting Volume 2... The closing of Dubside.net is a pitty for all Greenland kayak enthusiasts. And a personal drama for some.

Backgrounds? Liability and the fear for lawyers and the claim-culture is one issue, discord in kayaking-communities and organisations is an other. It's always the same story - all over the world. I can't put this better in words than Derrick did.
Geplaatst door Hans Heupink op 22:19