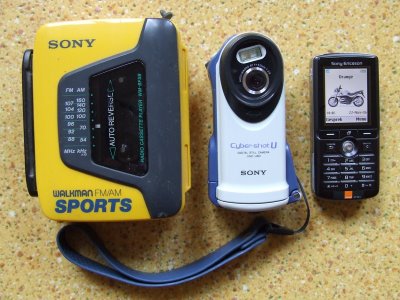 The first one: the Sony Walkman was the IPod of the late 80’s. As the transistor radio defined small music in the 1960s, the portable CD player in the 1990s, and the mp3 player in the 2000s, so did the Walkman define small portable music in the 1980s, with cassette sales overtaking those of LPs. It seems like ages ago. The Walkman never became a real favourite of mine. I regarded Compact Cassettes as an inferior medium and preferred listening vinyl records (LP’s) and used a traditional tape deck for recordings. Somehow I didn’t feel the urge to take music along with me while travelling. So the Walkman spent most of his live in a dark edge of a closet.

The favourite one: the Sony Cybershot digital still camera. It may look like a plastic toy, but it isn’t. It’s the ideal digital camera for action pictures on the water. It’s compact, waterproof, rugged, responsive, easy to operate with one hand and the picture quality is astonishing good. I am using it for almost 4 years now and haven’t seen a better kayak-camera yet. There are quite some other waterproof digital camera’s by now, offering more Megapixels, zoom and film-modus, but there is no camera coming near the Sony in ergonomics.

The new one: the Sony Ericsson cameraphone. It replaces the old Siemens cell phone I lost in the train last week (the second phone I lost in the train, NS (Dutch Rail), can begin a shop with all the gear I have forgotten in the train). This Sony is a miracle: a organiser that synchronises with the calendar, tasks, notes and contacts on the PC, it’s a radio, MP3-player, 2 MP Digital Still camera, Memory Stick, Internet Browser, E-mail, Memo-recorder, flashlight, SMS, MMS and you can use it as a phone… It will take some time before I am familiar with all these options. By now I do manage to use it as a phone, I have taken some pictures with it and I can listen to the radio. The picture quality is not as good as the Cyber-shot, but for publishing on the web it is good enough. The pictures of Sinterklaas at the meeting of the Seakayak coaches are made using the phone. As the Sony Memory Sticks of the phone are interchangeable with the Cybershot camera, I no longer need direct internet-acces to work on this blog. I should be able to post and publish pictures by phone: offering new possibilities for live trip-reports (don’t know if anybody is interested in my live reports, but I am happy with the sheer possibility). 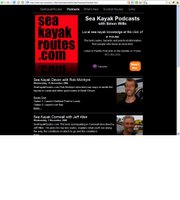 And I discovered something new: podcasting. To be more specific: seakayak-podcasting. Simon Willis publishes twice a month a podcast with interviews on seakayak-themes. Surfing the web I am seldom patient enough to listen to long interviews, but now I can download the postcasts to the phone and listen to Simon’s interviews while commuting by train. After a long day at the office, I find this a very relaxing activity, sitting in the train back home listening to Simon’s perfect British diction and enjoying the charming accents of the people he interviews. Just a bit dreaming away. Risking to forget to get out the train at Woerden-Station.

Btw:
1. Simon Willis recently started a seakayak blog.
2. I don't expect any rewards from mr. Sony for this free publicity. But I sure would appreciate it when Sony brings out a worthy successor of the Cybershot USC-U60 (6 Megapixel, movie capture mode 640x480 pixels please, and what about the idea of a integrated lens-wiper-system?)!
Geplaatst door Hans Heupink op 22:47

Hans, I too have the Sony U60. It is everything you say. In a moment of madness I purchased a Pentax Optio WPi. It is truly the worst camera I ever bought. I still use the Sony U60 in preference. Pixels are not everything.
Douglas :o)

Such a pity Sony stopped the production of this U60-camera and didn't bring out a worthy successor ;-(

Good idea: these podcasts.
I think I will start looking for another carradio: able to cope with podcasts or can play CD´s with mp3. Just to combine the pleasant (kayaking) with the unpleasant (the driving).