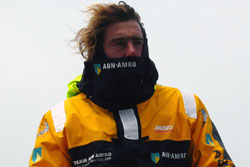 Between the kids-party for Jelle's Birthday and me busy packing the last things for Spiekeroog, I read about the terrible accident at the Volvo Ocean race. Hans Harrevoets died. Condolences to the family and the team.


From: http://team.abnamro.com/ :
5/18/2006 8:24:20 AM GMT TRAGEDY ON ABN AMRO TWO
Hans Horrevoets, one of the Dutch crew member aboard ABN AMRO TWO, died earlier this morning after being swept overboard from the boat.ABN AMRO TWO was sailing downwind in 25 – 30 knots of wind under main, fractional spinnaker and staysail. Seb Josse, Skipper of ABN AMRO TWO was at the helm, Hans, 32 of the Netherlands was trimming the spinnaker sheet, Nick Bice, Andrew Lewis and Lucas Brun were also on deck. The boat nosedived down a wave and water came washing back down the deck, when the water cleared Hans was no longer on deck.ABN AMRO TWO Navigator Simon Fisher explained the incident, “Immediately Seb hailed a ‘man overboard’ and we initiated man overboard procedures and we put in place the GPS positioning. The boat immediately turned around and began to search for him, meanwhile raising the alarm on shore. After Hans was found he was lifted back on board and the Accident and Emergency(A&E) department at Derriford Hospital, Plymouth, UK was notified that we had a major medical emergency and to stand by. Unfortunaly our attempts to resuscitate him were not successful."ABN AMRO TWO Skipper Sebastien Josse said, “We are all devastated by the events that took place this morning and all our thoughts are for Hans’ family. Throughout the whole MOB (man overboard) procedure the whole crew handled themselves calmly, professionally and with the utmost maturity. It is with deep regret that we were unable to resuscitate Hans.”Jan Berent Heukensfeldt Jansen, Managing Director of TEAM ABN AMRO said, “We are all shocked and devastated by this terrible news and our thoughts now are very much with Hans’ family. We are all aware of the risks that sailors face but nothing can prepare you for this kind of tragedy. My thoughts are also with the crew who I understand behaved in the most professional manner and reacted immediately and I wish them a safe passage home.”Glenn Bourke, Chief Executive Volvo Ocean Race said, “All of us at the Volvo Ocean Race are deeply saddened to learn of the loss of ABN AMRO TWO crew member Hans Horrevoets. At this time our thoughts are with Hans’ family and friends, his fellow crew members and all the members of TEAM ABN AMRO. Ocean racing carries inherent risks and we do our utmost to minimize those risks with the mandatory safety equipment we have on board. However, when an accident like this occurs it is a shock to everyone associated with the race. The Volvo Ocean Race family is a close-knit community and we will all lend whatever support is needed at this tragic time.The crew are no longer in racing mode but are making their way to Portsmouth as quickly as possible and will make a decision on further participation in the race during the Portsmouth stopover.
Geplaatst door Hans Heupink op 23:39

I was so sad to read about that last week.