On Whit Monday Woerden is dominated by the Triathlon. Two distances: the 1/4 and the 1/8 triathlon with 250 participants swimming in the Singel, biking in the Green Heart from Woerden to Kamerik and running around the historical town centre.

Kanovereniging Wyrda was asked to supervise the swimming part, together with the diving-team of the firebrigade. Because of the low watertemperature (15 degrees Celsius) the organisation expected some drop outs. Only one swimmer gave up: Rob was his rescuer, he picked the exhausted atlete up with the bow of his kayak. The rest of our job was guiding the first swimmer along the course and keeping other boats away. In practice that's mainly just a bit drifting around. The kayakers were dressed in the Wyrda-cluboutfit to give local publicity to the kayak club. I doubt if that's very effective, but we had our fun. It's an odd sensation kayaking in the middle of a field of hunderds of swimmers.

One of the triatletes was my partner Janine. She finished first in her category (1/8, D40)! The Wyrda paddlers were very enthousiast and the idea came to participate next year with a team of the kayak-club. I am affraid this winter is going to be hard training: my running and swimming condition is not very good... 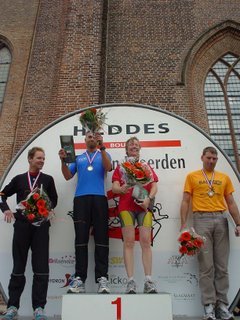