Watch out for Marine Mammals! 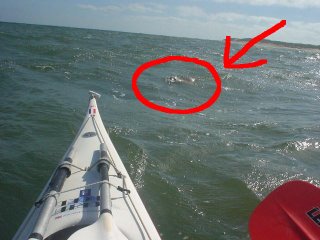 Vlielandkamp 2004 - I want a zoom on my waterproof Sony-camera!
Cailean keeps an interesting Scottish Seakayak-blog. He writes regularly about developments on the BCU coaching certificates and the star awards – the standards were the Dutch qualifications are originally based upon. It ‘s fascinating to see that similar discussions are taking place on both sides of the North-sea.

Also at the point of interaction with wildlife conservation organisations there are parallels. Yesterday Cailean referred in his post to the draft of the 'Scottish Marine Wildlife Watching Code'. This Code is a guidance for everyone on how to act around wildlife so that it stays wild, and stays in Scotland. It’s a delicate matter concerning the thin line between enjoying wildlife and disturbing wildlife. The perception of the individual tourist (or seakayaker) and the people on the wildlife protection-side on this matter may differ widely! I refer to the ongoing discussion in the Netherlands about the interpretation of the Code for aquatic sporters in the Wadden Region and the introduction of a Sea-reserve in the Voordelta. It’s good to develop user codes and guides of best practices on this theme. Awareness of the impact of ones behaviour is essential. And although a seakayak is a small and silence craft, it has the potention to disturb wildlife.

What struck me with the draft of the Scottisch Code was that there is a separate chapter dedicated to kayaking. Striking that a organisation of Natural Heritage pays attention to kayakers in the marine environment in their documents! In the contacts with similar Dutch organisations and authorities I often notice that they have hardly got any idea of the existence of seakayaking (or what it is about). Unknown makes unbeloved. Regulation and codes are primary focussed on sailing-boats and motor-vessels, with sometimes strange consequences for kayakers. There still is a lot of Mission-work to do!

Btw: the news around Simonszand inspired René to brainstorm on how to go on with camping in the Waddenzee; a marvellous area with sandplates, creeks and so on. Group camping is of the record nowadays, René explores the resting possibilities. It's a thin line between...
Geplaatst door Hans Heupink op 22:47

It's fun how different countries go about things - generally we all get to having similar schemes / setups in the end.

The first Marine & Coastal National Park is being currently proposed for Scotland and is causing a wee bit of hassle as some people want it and others don't. Visit www.snh.org.uk/strategy/CMNP/sr-adnp01.asp

As to the changes in the BCU star tests - we are going to take the lead from the Irish Canoe Union with regards to the 4 Star it appears. It will become an award with a basic leadership element included and more journeying skills included. So closing the huge gap between 4 and 5 star slightly.

Hi Cailean!
As we are starting an update of the Dutch "Zeevaardigheidscertificaat -ZV" (eq. BCU 4 Star) the NKB Sea Committee is very curious about the upcoming changes in the BCU-standards. We don’t want to differ to much. Personally I have a bit mixed feelings about the idea of introducing leadership at the 4 star (ZV)-level. On one hand it’s a fact that 4 Star kayakers go out in groups without a 5 star group-leader -> for that purpose some more emphasis on leadership and some more kayakexperience under different circumstances would be good for ZV. On the other hand: ZV is the first level of certification on seakayaking-skills, making the gap with ZV-Extra (eq. BCU 5 star) smaller creates a bigger gap on the entry level. We don’t have a 3 Star award for seakayaking in the Netherlands. Upgrading ZV disturbs the system: it leads to the introduction of a new “starting-level”. That might have it’s advantages, but it brings in a lot of work (defining standards, making plans for new course programs… ;-)!

We will see where it ends!