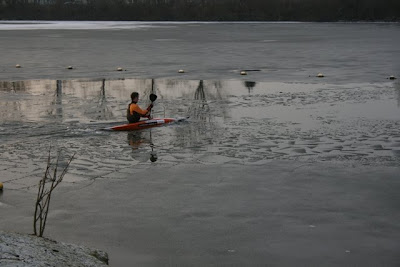 Picture of Robert Bouten and (original Dutch) text of the news-item: courtesy NKB
I just stumbled across this nice little news item on the NKB-website. Here's a translation for non-Dutch web-surfers:

January 12th, 2009
Ice-blues: Slalom-kayaker Robert Bouten breaks a hole in the ice in order to train

While the Netherlands are completely mad about (skating on) ice - the ice is a burden for Olympic finalist Robert Bouten. At his training spot (Dutch Water Dreams-Zoetermeer) the water is frozen and training is getting awkward. This morning Robert made a big hole in the ice to be able to paddle.

Since a few weeks the pumps of the white water track in Zoetermeer can't operate due to the frost. Robert continued his training sessions on flat water. But that's also getting more difficult because of the thickening layer of ice. "When it keeps on freezing - I really must look out for natural white water that doesn't freeze" says Robert. "I used to train at the Brabantse Dommel. I'll go back to my good old training site for the coming days."

Bouten's discomfort is only temporary. In just over a week he leaves for Sydney. He will train for 5 weeks on the Olympic track of Sydney 2000 and finish his training stage down under with the second race of the new "World Ranking Series".

Ice-skater's blues: after a fantastic winter-weekend, thaw has set in rapidly. There is water on the ice all over. And it won't get cold in the next week. But it will take some more time before the ice is gone and paddling around Woerden and Zoetermeer is possible again.
Geplaatst door Hans Heupink op 20:13