Solo - a portrait of Andrew McAuley 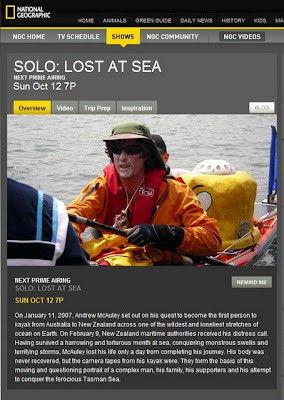 NG-website: "On January 11, 2007, Andrew McAuley set out on his quest to become the first person to kayak from Australia to New Zealand across one of the wildest and loneliest stretches of ocean on Earth. On February 9, New Zealand maritime authorities received his distress call. Having survived a harrowing and torturous month at sea, conquering monstrous swells and terrifying storms, McAuley lost his life only a day from completing his journey. His body was never recovered, but the camera tapes from his kayak were. They form the basis of this moving and questioning portrait of a complex man, his family, his supporters and his attempt to conquer the ferocious Tasman Sea."

I missed the première last Monday. A pity but programs on National Geographic TV are continuously repeated. NG TV schedules are rather inscrutable: according to the website next airing is on Sunday, October 12th. However National NG-TV-Schedules may be different? Until then: watch the trailer -breathtaking, shivering...
Geplaatst door Hans Heupink op 10:06

Such a tragic story... I'm left wondering about his family though...

saw another interesting article about him today: http://www.petermanseye.com/anthologies/cowboys/332-an-extreme-price

I feel really sorry for his son (and his wife), who is going to be affected all his life about this.All his son is going to have is a sad film about is Dad. I thought it was an act of pure and utter selfishness on Andrew's part. He had wife and a lovely child and I just feel when one has a family they need to come first rather than the pathetic view to become the 'first' to do something.
With regards the actual crossing i thought he didn't have the right kit. Ill prepared. Where was the survival suit?
Fine if you want to do this sort of thing but if you succeed you get all the glory and if you lose then your friends and family have to pick up the pieces. Really selfish.
Jon, Wales

Hi Jon!
Well, there have been huge discussions on the web about responsibility and acceptability of Andrews' adventure after the dramatic ending of his expedition.
Losing father and husband is terrible. It's not up to me to judge. Crossing the Tasman sea is extreme - it's only comparable with things like climbing K2 or Mount Everest without oxygen-support. Only extra-ordinary characters start undertakings like this. Only extra-ordinary characters can accomplish such an operation. Andrew was one of the few people who could have made it. He didn't and that's tragic. It's the risk of the extra-ordinary life Andrew lived - and shared with a family. This was Andrew.
I was very impressed (and also touched) by the documentary. Harsh.