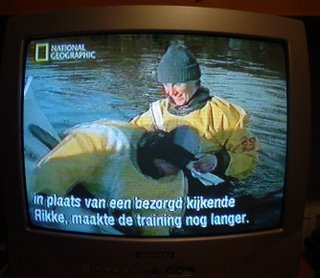 In the age of Broadband Internet/DSL one forgets looking television can be interesting too. This week I saw -by coincidence- an edition of the National Geographic Series “Going to Extremes”. Nick Middelton travels to the world's hottest, coldest, wettest and driest inhabited places to investigate how traditional communities adapt to life in harsh environments. In the edition called “Ice” Nick joins the Inuit in northern Greenland in hunting seals and narwals. In the town of Ilulisat he gets an introduction to Greenland kayaking by Rikke, a Greenlandic Kayak-coach. The program schedule of National Geographic is inimitable, they are broadcasting rehearsals of there series over years, so when you get the chance: “Going to extremes” is worth a look!

Another abslolute recommendation on National Geographic Television: “Atlantic Brittain”. This series was broadcasted in the Netherlands two years ago. Adam Nicholson sails along the wild western shore of the British Isles. A great report of a fascinating journey along seakayakers dream-spots, as well as an interesting reflection about humans' relationship to the sea. On the site of the WGBH is a video-report of a lecture of Adam about his voyage.

TV and Internet are nice, interesting and so on, but by far no substitute for real: it's getting time to go out kayaking at sea again! Lately to much dreaming and to less kayaking for this guy! But September will be better!
Geplaatst door Hans Heupink op 22:18

The BBC has high-standard programmes. One of them was called Coast. They travelled along the beautiful shores of the UK, including Nothern Ireland.
They now also publiced it in a book, it is worth to buy it.

And when you are coming home after a weekend of wind and waves, it can be very relaxing. To see the nice pictures on your screen:
They you can call yourself a ARMCHAIR ADVENTURER.